The Lebanese news channel LBC , was allowed to enter & film inside an IAF base in a bid to send a strong message to the Hezbollah, and the reactions were quick to come, with everyone from Hezbollah to state regulators claiming TV report was Zionist propaganda.

Lebanon was astir after a Lebanese news channel was allowed unprecedented access to an IAF base in Israel in a bid to send Hezbollah a message. 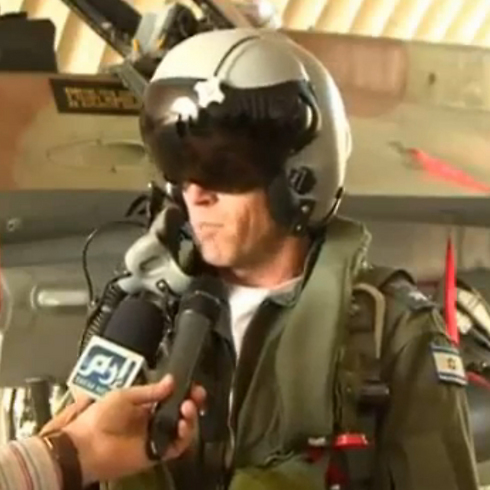 Throughout the weekend, media outlets from all over Lebanon reported on the interview with Israeli Air Force commanders that was broadcast by the LBC network, with some claiming the story normalizes relations with Israel, which is prohibited according to Lebanese law.

In the original story, in addition to the air force commander, Captain Avihai Aderi, head of the Arab-language IDF Spokesperson Unit, was also interviewed, and both attempted to convey a strong message to Hezbollah according to which Israel is closely monitoring arms transfers from Syria to the terrorists’ Shiite organization.

The Hezbollah affiliated outlets used the opportunity to slam LBC – a channel affiliated with anti-Syria and anti-Hezbollah March 14 Alliance.

Like other media-outlets in Lebanon, Hezbollah mouthpiece Al Akhbar slammed just the fact the channel’s film crew entered an Israeli military base.

Lebanon Caretaker Information Minister Walid Daouk gave an interview to Al Akhbar and said the story was tantamount to cooperating with the enemy. “This is unacceptable under no circumstance,” the minister said, and claimed he was considering taking action against the channel in accordance to the decision of the Lebanese National Audiovisual Media Council.

Head of the council, Abdel-Hadi Mahfouz spoke to Asharq Al-Awsat and said “this is a legal offence and because of the issue the station is in risk of sanctions for screening enemy propaganda.”

Meanwhile, LBC are trying to cut their losses. Head of the channel Pierre El Daher gave an interview to Asharq Al-Awsat and said that the channel’s management was committed to respecting Lebanese law which prevents them from having direct contact with Israeli officials.

He stressed that the video was produced by a Palestinian production company and was then passed on the Lebanese channel. But that is not enough for Mahfouz: “You cannot hide behind a production company to excuse your mistake. We know this was done on purpose.”

LBC, the network that released the highly-debated interview, issued a statement on Saturday in which they claim they have fallen into an IDF trap, which used the network for its own purposes.

“The error was made due to a misunderstanding, and not, God forbid, due to conspiring with the army that carried out the heinous acts in Lebanon, unrelated to its actions against the Palestinian people. They are still occupying Lebanese land and their Air Force is still violating Lebanese sovereignty,” the statement read.