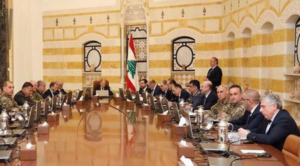 “We grant the army forces with the political backing to act against any Israeli aggression on the border—on land and at sea,” the council said in a statement. “The Israeli fence on our border constitutes a violation of our sovereignty and of Resolution 1701. We will continue acting on all levels, the regional and international, to oppose and prevent Israel from building the separation fence.”

Earlier Wednesday, Energy Minister Yuval Steinitz stressed that Israel seeks a diplomatic solution to the dispute with Lebanon over territorial and maritime boundaries, but warned any aggression will be met with force.

“I think both Israel and Lebanon are interested in a diplomatic solution. They should not make any threats, though, and definitely not infiltrate our economic waters,” Steinitz told Ynet.

He warned that “if heavens forbid we are attacked, the response would be a lot more severe, quick and unequivocal than in the past.”

Lebanon’s leadership vowed on Tuesday to act to prevent Israel from building a wall on Lebanese land at the frontier, and threatening an offshore energy block in disputed waters.Israel says the wall it is building is on Israeli sovereign land. The Lebanese government says it passes through territory that belongs to Lebanon but which lies on the Israeli side of the Blue Line, where the UN demarcated Israel’s withdrawal from southern Lebanon in 2000.

Lebanon also has an unresolved maritime border dispute with Israel over a triangular area of sea of around 860 sq km (330 square miles) that extends along the edge of three of five blocks Lebanon put to tender early last year.

Lebanon in December approved a bid by a consortium of France’s Total, Italy’s Eni and Russia’s Novatek for two blocks. One of the awarded blocks, Block 9, borders Israeli waters, and Israel claims it belongs to it.

Steinitz said Israel was willing to accept American mediation to resolve the issue diplomatically. “There was international mediation on the matter in the past. We were close to reaching a compromise in 2013, but the whole thing collapsed at the eleventh hour,” he said.The energy minister stressed, however, that “let there be no doubt, the State of Israel is the strongest nation in the region, and we will defend our economic waters and our gas rigs and fields.”

US Secretary of State Rex Tillerson is expected to visit the Middle East, and particularly Lebanon, soon to help in mediation between Jerusalem and Beirut over the two issues.

Washington has already sent the Assistant Secretary of State for Near Eastern Affairs, David Satterfield, to Lebanon for a surprise visit. He met with senior government officials on Tuesday to discuss the border disputes.

The United Nations Interim Force in Lebanon (UNIFIL) is also trying to calm down the tensions by facilitating talks between IDF representatives and their counterparts in the Lebanese army.

The Shiite Lebanese terror group Hezbollah, meanwhile, began disseminating flyers Tuesday with an overt threat to Israel, saying, “Whoever harms gas and oil sites in Lebanese economic waters, their own sites will be harmed, and they know Lebanon is fully capable of doing so.”

“I didn’t need these explicit threats,” Steinitz said. “Energy security and the protection of our energy installations—and to a great extent the gas rigs as well—is at the top of our list of priorities,” he said.Describing the threat of anti-ship and ballistic missiles from Lebanon, Steinitz said that “On this matter, there is also a lot being done to defend ourselves. Israel is more or less the world champion in anti-missile technology: The Iron Dome, David’s Sling, Barak 8, and other things we will no doubt develop in the future. But we are definitely concerned, and we are not idle on this matter.”

Steinitz stressed that despite the threats from Hezbollah, Israel will continue drilling for gas.

“We have to open up our energy sources, primarily the massive gas fields we found in the Mediterranean Sea—Leviathan, Karish and Tanin,” he said. “It’s important not just for economic and geopolitical reasons, but also for diplomatic reasons—our ability to sell gas to Europe.”

Maj. Gen. (res.) Amos Yadlin, the head of the Institute for National Security Studies (INSS) and the former head of Military Intelligence, said Hezbollah was merely trying to find other pretenses to attack Israel.

“The Iranians and Hezbollah are planning on building a precision missiles factory in Lebanon. Hezbollah can’t justify this to the Lebanese people and is looking for other reasons that it could possibly explain. One of these reasons is the gas field, and the other is an overground obstacle that Israel is building on the border,” Yadlin said.

Yadlin rejected Lebanese claims that the Israeli border wall was being built on Lebanese territory. “There is no complete overlap between the border as it was determined by the UN as part of Resolution 425 in 2000 and the security fence Israel built,” he explained. “Between the fence and the real border there is an area referred to as an enclave. The Lebanese got used to it being theirs, even though it’s ours. The obstacle… is definitely south of the line marked by the UN. Hezbollah is trying to create a border dispute that doesn’t exist. It’s the same with the gas field.”

The INSS chief said that while Hezbollah has precise Russian P-800 Oniks (Yakhont) missiles they got from Syria, which could hit the gas rigs, Israel has its own defensive and offensive measures against such missiles. “We’ll see the results if a conflict breaks out,” he said.