Liberman: ‘We offer our hand in peace – but we’ll cut off the hand that threatens us’

Foreign Minister Avigdor Liberman addressed the Remembrance Day ceremony in Kiryat Gat on Monday where he stated that the Jewish people are “a peace-seeking nation” but also said that, “We extend our hands in peace, but we will cut off every hand that threatens us.” 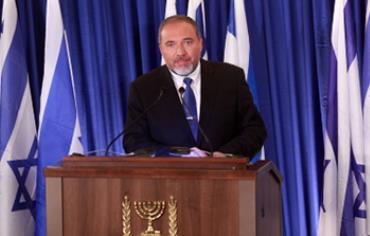 The foreign minister told listeners that regarding recent peace efforts with the Palestinians, “Special efforts were made by successive Israeli governments who were willing to make concessions to attain this goal, but when there is no willingness on the other side this becomes a virtually impossible task.”

He continued to emphasize the country’s commitment to peace saying that, “Our hand always has been and always will be extended in peace to all our neighbors, as was declared and signed by our founding fathers in the Deceleration of Independence.”

Liberan stressed that the government’s commitment is, however, first and foremost to ensure security for Israeli citizens.

“This commitment is absolute, and we will permit no compromises, despite Palestinian threats of a third intifada, or threats by Abu Mazen [PA President Mahmoud Abbas]  of dismantling the Palestinian Authority or other threats and intimidation attempts. A nation that has known the War of Independence, the Six Day War, the Yom Kippur War and has fought terror on a daily and even hourly basis, is not easily intimidated. To every threat and provocation by the Palestinians or their sponsors, namely Iran, we will know how to respond in an appropriate and painful manner.”