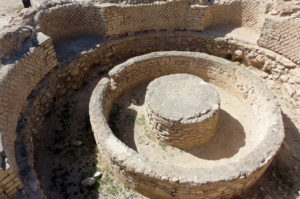 Here is a lesson that teaches us how the Palestinians today treat remnants of the past. Following the revolt led by Mattityahu and his sons (the Macabbees) against the Greeks in 167 BCE, Jews had sovereignty in the Land of Israel for some 200 years, until the Herodian era. Forty years after Mattiyahu the Hasmonean and his sons first relit the Temple menorah and found that its oil miraculously lasted eight days, their descendants built grand winter palaces at the mouth of the Parat stream, at the entrance to Jericho. King Herod, who excelled at building – but also at killing and destruction – built three more palaces of his own nearby.

The Hasmonean palaces are located in what is today Area C, which is under full Israel control, but they can only be accessed via Area A, where the Palestinians are in full control. Most of Herod’s Third Palace, the grandest of the trio, lies within Area A.

Recently, a team from the Kfar Etzion Field School visited the site and was appalled to find that the Palestinians, who received the excavated and orderly site as part of the Oslo Accords, had built housing around it. Some homes were constructed on the grounds of the palace itself. The remains of the palace are being systematically demolished to construct a road. The historic edifice is being stripped of its stone, and the supporting pillars and arches have been defaced.

Not far away, in Area C, are the Hasmonean palaces, the most important preserved Hasmonean site in the country. These palaces, like the Herodian ones, were excavated by the late Professor Ehud Netzer, one of Israel’s pre-eminent archaeologists, who was killed seven years ago in an accident at the Herodion site, which he had also excavated. A week before his death, he visited MK Zeev Elkin, today Jerusalem affairs and heritage minister. Netzer laid the Hasmonean palaces file on Elkin’s desk and asked the MK to help save them.

At the time, the flow of the Parat stream was beginning to undermine the foundations of one of the palaces. The Palestinians had begun building illegally next to the site, and desecrating it. One of the palaces was even vandalized with a swastika. Natural wear and tear had also been at work.

Elkin is a politician, but has a penchant for Jewish history and is a historian by education and avocation. When Netzer was killed, Elkin saw his request as a sort of last will and testament, and took action. The IDF and the Civil Administration, which control Area C, stopped Palestinian assaults on the site. Once he became a minister, Elkin invested millions in preservation work. The Hasmonean palaces are safe.

In Area A, on the other hand, the Palestinian Authority has exclusive control, and preserving and protecting antiquities is not its top priority. When Civil Administration staffers, who have no authority in Area A, received reports of the destruction taking place at the Herodian palace, they tried to exert influence and to reach out to local village leaders. But the Palestinian construction around the Third Palace has not stopped.

The history of the Third Palace is bloody and full of intrigues, but it is part of our heritage. Herod exiled the last ruler of the Hasmonean dynasty, Antigonus II, seized the Kingdom of Judea, and married Miriam (Mariamne) the Hasmonean. Miriam’s brother was Aristobolus III, the last high priest from the Hasmonean line.

Herod was determined to thwart any possibility of a revival of the Hasmonean dynasty, and lured Aristobolus to his palace near Jericho (probably the Third Palace), where he drowned him in one of its pools, taking care to make the murder look like an accident. Herod also executed Miriam’s grandfather, Horkanos II, her mother Alexandra, and finally Miriam herself, the last of the Hasmoneans.

Along with Caesarea, the city of Sebastia north of Nablus, Herodian, and the Temple, the winter palaces Herod was inspired by the Hasmoneans to build for himself at Jericho were the grandest of his projects in the Holy Land. British archaeologist Charles Warren, who tried to locate the site of biblical Jericho, was the first to dig there. German and American archaeologists followed him, and finally Netzer’s team.

As far as anyone knows, the Hasmoneans built their palaces in the days of Yochanan (John) Horkanos I, the high priest and ruler of Judea, or in the time of King Alexander Yannai, who also served as the high priest. Both Yochanan Horkanos and Alexander preceded Herod by a few generations. In 31 BCE, a massive earthquake destroyed the Hasmonean palaces. Herod covered the ruins with dirt and built his second palace on top of them, which is how parts of the Hasmonean palaces survived. They are characterized by stucco adornments in the shape of building stones, colored frescoes that imitate marble, by water conduits that provided irrigation for gardens,  and the remains of small bathing pools and several mikvehs (Jewish ritual baths).

Netzer, who excavated the Third Palace, found that it had stood on both sides of the Parat stream and that the gushing spring water could be seen from it. The Third Palace featured a northern wing, a sunken garden, a hill to the south and a large pool. The builders used the Roman building patterns known today as opus reticulatum – small diamond-shaped stones, 10 cm. by 10 cm. (3 in. by 3 in.), laid diagonally – and opus quadratum – rectangular stones set in parallel rows.

It is unclear how much of this beauty remains. Yaron Rosenthal, director of the Kfar Etzion Field School, who sometimes works with the Palestinians on environmental preservation projects, finds it difficult to hide his anger.

“Israel sees how one of the grandest palaces ever built in the Holy Land is being destroyed, and is standing by helplessly, because under the Oslo Accords the site, which is 30 meters from Area C, was made the responsibility of the Palestinians. It’s time for Israel to say, ‘No more.’ With all due respect to the Oslo Accords, we will not let you destroy important [archaeological] remains linked to the history of the Jewish people in their land, remains that are part of the cultural fabric of this country,” Rosenthal says.

“We [Israelis] are horrified when to our east and north, Islamic State destroys archaeological treasures, or when Jewish cemeteries are desecrated in Europe. But when it happens a few dozen yards from our own territory, we’re helpless. The Palestinians are causing damage, building a residential neighborhood on top of this unique site, wrecking it with tractors, and causing irreparable damage, which must be stopped.”

The Palestinian Authority has refused to comment. Elkin, whose office saved the nearby Hasmonean palaces in Area C, is trying to send an archaeological team into Area A to excavate there. That may be the salvation of Herod’s Third Palace.

Top Photo: Circular frigidarium (cold room), with four semicircular niches in each of its corners. – Photo courtesy of Biblewalks.com