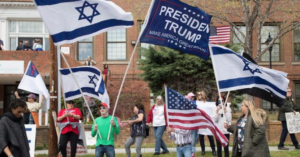 I spoke in Hillsborough, NC in March of this year and not only were they also there holding confederate flags, they were joined by right wing Zionists carrying Israeli flags. So disgusting. https://t.co/zb1lfUYdEI

Sarsour responded by saying that she spoke in the same location in March and that “not only were they also holding confederate flags, they were joined by right wing Zionists carrying Israeli flags. So disgusting.”

The Confederate States of America was a white supremacist unrecognized republic in the 19th century which supported the right of white people to own slaves.

Louis Farrakhan supporter and Sharia law advocate Linda Sarsour (2nd from Right) stands with Rep. Rashida Tlaib (2nd from Left) holding a map where they have replaced the State of Israel with Palestine.

Sarsour has previously been outspoken in her disapproval of the Jewish state, oftentimes referring to land under Israeli occupation as Palestine. She previously appeared to accuse American Jews of dual loyalty to Israel. She claimed that the reason people attack supporters of the boycott, divestment and sanctions (BDS) movement is because they “masquerade as progressives but always choose their allegiance to Israel over their commitment to democracy and free speech.”

She previously worked with Ilhan Omar and Rashida Tlaib (pictured above), both of which were barred from entering Israel due to their support of BDS earlier in August. Tlaib was later approved for entry after filing a plea to visit her grandmother, but then rejected the approval, citing “oppressive conditions” as the reason for the cancellation.

Sarsour has also noticeably not disassociated herself from Nation of Islam leader Louis Farrakhan, who has made antisemitic claims for decades, most recently comparing Jews to termites.

Twitter users fired back at Sarsour after she posted the anti-Zionist tweet, claiming that evidence shows that there were pro-Israel protesters, but not a single Confederate flag was to be seen.

I know, you don’t want to believe it, but it’s true. When I was in Hillsborough, NC I was protested by local racists. That’s just the facts. It was reported on too. Here are some photos that are worth a 1000 words. They may change costumes, but their message is consistent. pic.twitter.com/9JmDQZ4n2R

Banned for 30 Days on Facebook for posting that Sarsour is a Nazi wannabe.

There were folks that said this was not Linda Sarsour, but when confronted on her Twitter account, she refused to respond…deny the query.

So, I noticed an idiosyncrasy about her style in hijabs, that I couldn’t find with other Muslim women.