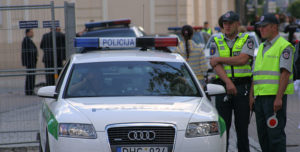 Lithuanian Foreign Minister says, “Holocaust denial and praising Adolf Hitler is a crime in Lithuania. Persons who spread these ideas are not welcome in our country.”

Lithuania has moved to blacklist Holocaust denier David Irving to prevent him from entering the country should he try to do so later this year, the country’s Foreign Minister, Linas Linkevicius, told AFP on Tuesday.

“Holocaust denial and praising Adolf Hitler is a crime in Lithuania. Persons who spread these ideas are not welcome in our country,” stressed Linkevicius.

The minister said he would request the migration department to officially blacklist Irving who could attempt to enter Lithuania later this year.

Irving, who has described himself as a “Hitler expert,” was scheduled to lead a nine-day tour of Nazi death camps in Poland this year, but Polish Foreign Minister Jacek Czaputowicz announced that Irving would not be permitted to enter the country.

The controversial British historian was jailed in Austria in 2006 for denying the Holocaust. In 2010, he led a controversial tour of World War II sites in Poland, including the former Treblinka death camp, drawing outrage and condemnation from Holocaust survivors and anti-racism groups.

Irving is the author of “Hitler’s War”, a book which attempts to minimize both Nazi atrocities and Adolf Hitler’s responsibility for them.

“There are facts, there are opinions, and there are lies,” says historian Prof. Deborah Lipstadt. – Youtube/TED

Irving lost a libel suit he brought against Holocaust historian Deborah Lipstadt in 2000. Initially, he claimed that Hitler was not aware of the program to exterminate the Jews.

He later began to deny the Holocaust outright, claiming, among other things, that there is no evidence to prove that Auschwitz’s gas chambers ever existed.

Under the Lithuanian law, anyone found guilty of denying or “grossly trivializing” the Holocaust faces a penalty of up to three years behind bars.

Before World War II, Lithuania’s vibrant Jewish community numbered around 200,000 people. Over 90 percent of them perished between 1941-1944 during the Holocaust at the hands of the Nazis and their local collaborators.