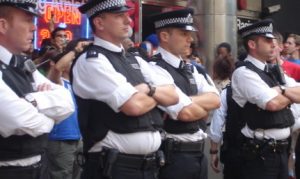 Alexander Goldberg, a police Chaplain and the father of the victim, posted the details of the incident on Facebook on Sunday. The attack occurred on May 27.

“Last Shabbat (10 days ago) my 16 year old daughter was racially and religiously abused and physically attacked in public by young men. A group of five young men were playing basketball and my daughter was in the park with two girls (all three of them are religious Jews and wear skirts on Shabbat so were identifiable),” Goldberg wrote.

He described how the young men began staring at the girls, and how when his daughter asked why they were staring two of them began shouting obscenities and anti-Semitic chants at her.

Goldberg wrote that “One of them, from an ethnic minority background himself said ‘Hitler should have killed all you Jews when he had the chance… You should have all been gassed.””

When she protested against their anti-Semitism one of the boys then threw their basketball into the girl’s face, causing her to bleed. He then proceeded to kick her while another of the boys punched her.

The girl’s friends pulled her away from her attackers. They found a former Royal Mail employee who called the police for them. However, the police did not send officers to the scene for two hours.

Goldberg said that he was “proud of my daughter. Proud of her for standing up to sexism, racism and religious abuse. Proud of her for continuing to fight for the rights of others despite a vicious assault on her…”

“Less proud of the police service that I have worked with for over two decades in failing to respond to three girls being attacked and racially abused… In a time of heightened racial and religious tensions they should have been on the scene to aid a young girl who had been punched, verbally abused and was bleeding…”