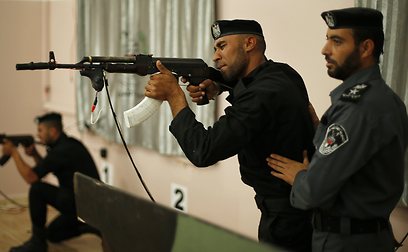 For the cash-strapped Hamas government, the system is a much-needed money saver that eliminates the need to train with live ammunition, which is in short supply in Gaza. Hamas also says the quiet, indoor facility is less likely to attract the attention of the IDF than the open-air firing ranges that are frequently targeted in airstrikes.

“Our training centers are targeted all the time by the occupation, so we have a closed-door shooting range that is hidden from the occupation,” said Abdallah Karmot, the deputy director of training at Hamas’ Interior Ministry, which oversees security in the seaside strip of land. “We also save money and the time it takes to move officers to training camps for live shooting.”

Karmot said Hamas developed the electronic shooting range with homegrown technology. The modified Kalashnikovs (AK-47), powered by software developed by Hamas programmers, fire green laser beams at their targets, which mimic the sound of real rifle fire when there is a direct hit.

The move indoors is the latest sign of the deep financial crisis plaguing Hamas, which is suffering its worst money woes and ammunition shortage since taking power. Israel and Egypt have maintained a blockade of the seaside strip since Hamas seized power from the rival forces of Palestinian Authority President Mahmoud Abbas in 2007.

Israel considers Hamas a terrorist organization responsible for killing hundreds of Israelis in suicide bombings and other attacks. Israel and Hamas have engaged in heavy fighting over the years, most recently 2012’s eight-day Operation Pillar of Defense during which Hamas fired hundreds of rockets into Israel. 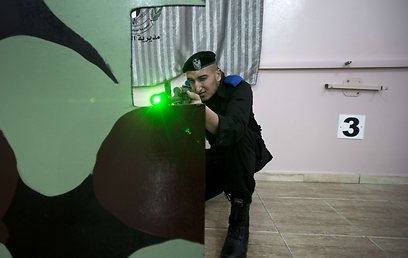 Under the blockade, Egypt looked the other way for years as cement, fuel and weapons were smuggled into Gaza through a network of tunnels running under the border with Egypt.

That changed last summer after the Egyptian military overthrew the country’s Islamist president, Mohammed Morsi. Egypt’s new military government cracked down on Hamas, the local offshoot of Morsi’s Muslim Brotherhood movement, and destroyed nearly all of the tunnels. With the tunnels out of operation, Hamas lost a key source of tax revenue and a main conduit for weapons.

“Due to the Egyptian crackdown on the tunnels, we can talk about some sort of arms crisis facing all the armed groups in Gaza, as well as the security forces that used smuggled supplies in the past,” said Adnan Abu Amer, an expert on Palestinian militant groups at Gaza’s Al Ummah University.

He said the prices of some weapons have nearly doubled in recent months, and the price of ammunition has tripled. “The most significant result of the tunnel demolitions has been the scarcity of weapons, ammunition and explosives,” he said.

The indoor shooting range is roughly 45 yards (40 meters) long and is located in the headquarters of the training department of the Interior Ministry. It can only handle two officers at a time. Karmot said a total of 1,700 men have used the site, and Hamas is considering the establishment of additional locations. 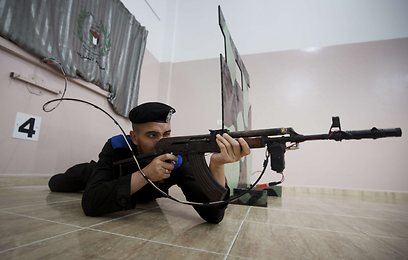 “This is great for me. I can have more time in training and shoot as much as I want without worrying about a limit on bullets,” said Mohammed Debo, a 22-year-old police officer.

Debo took a rifle, which was linked to a computer system by a cable, and aimed at a target posted on a wooden stand. As he pulled the trigger, green flashes of light could be seen on the target. The weapon crackled and popped with the sound of gunfire as he pulled the trigger. A trainer sitting to the side tracked the accuracy of his shots on a laptop.

Debo said the gun felt almost like the real thing, though he felt a “slight difference” in the recoil.

“The good thing is that you can walk to the hall any time, take your gun and start training,” Debo said. “In live shooting, you need to move locations and make sure that there is no threat from the occupation side.”