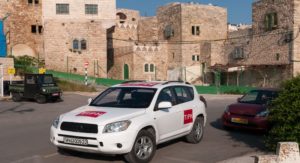 TIPH is a group of European civilian observers who have operated in Hevron since 1994. Comprised of representatives from Norway, Italy, Denmark, Sweden, Switzerland and Turkey, TIPH says that it “monitors the situation in Hebron and records breaches of international humanitarian law”.

The organization has courted controversy with its confrontational dealings with security forces and Jewish residents of Hevron.

In July in a TIPH member who took part in a tour of the Breaking the Silence organization in Tel Rumeida in Hevron slapped a 10-year-old Jewish boy. The member was arrested and forced to leave Israel by the Foreign Ministry.

A few weeks later, Netanyahu ordered the TIPH commander to be summoned for clarification by the Foreign Ministry following publication of footage on Arutz Sheva in which foreign observers are seen puncturing the tires of a car belonging to Jewish Hevron resident of Elad Fass.