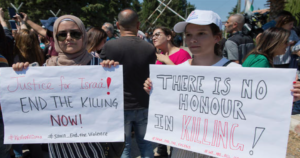 The impetus for the recent demonstrations and outcries was the death of Israa Ghrayeb of Beit Sahur, near Bethlehem, who was allegedly killed by family members after she was seen in public with a man whom she had agreed to marry.

Ghrayeb’s story highlights the phenomenon of so-called honor killings in Arab society, her death sparking outrage in the Palestinian territories and on social media across the Middle East and North Africa, where hundreds of rights activists have protested in Palestinian cities, demanding action against the alleged perpetrators and legal protection for women.

“We are moving toward forming the law and other measures to protect women before the end of this year, in addition to the adoption of a (minimum) age for marriage,” PA Minister of Women’s Affairs Amal Hamad tells The Media Line.

Hamad says the PA has an integrated vision regarding this legislation, explaining that for years, the ministry has been working closely with women’s organizations in the West Bank to document domestic violence and plan the laws to stop it.

“Moreover,” she says, “we are going to review protection efforts provided in the country to make sure they are proper. Uniting efforts in this matter is very important to achieve our goal,” she said.

Fared al-Atrash, a Palestinian lawyer who heads the Independent Commission for Human Rights in the southern part of the West Bank, stresses that Palestinian women need legal protections but, even more importantly, deterrence against abusers and killers.

“Those applying the law must be conversant with issues regarding violence against women,” Atrash says. “In addition, the new laws must be accompanied by awareness programs aimed at fighting an anti-women culture and establishing a new culture that supports females and their rights.”

On Saturday evening, for the third day in a row, thousands of females protested in the West Bank and elsewhere to put an end to physical, psychological, sexual and economic violence against Palestinian women as part of a movement called “Tala’at” under the slogan “There is no free homeland, but free women.”

Demonstrations took place in the Palestinian cities of Ramallah, Rafah and Jish, in addition to protests by Palestinian women and girls from Jerusalem, Jaffa, Nazareth and Araba, and as far afield as Beirut and Berlin.

“We are a group of Palestinian women from the Jordan River to the Mediterranean Sea and beyond, struggling against all forms of violence against Palestinian women everywhere,” says Razan Quraan, a co-organizer of Tala’at.

Quraan says through Tala’at, they aim to create solidarity that breaks the geographic, social and political fragmentation imposed on Palestinian women as they battle the Israeli occupation.

“We are also trying to restore our society to be a just and safe society for everyone as part of our struggle against (Israeli) colonialism,” she says. “We refuse to let the struggle for freedom by Palestinian women be postponed until our national liberation, and with this in mind, our movement aims to redefine national liberation as (plain) liberation.”

She adds: “Today, we are in serious need for a movement that acknowledges that national liberation is also the liberation of Palestinian women.”

Dina Azouni, a leading Palestinian activists who has participated in Tala’at rallies, says the importance of the campaign lies in revealing the stories of violence against women in Palestinian society and achieving social justice through gender equality.

“As a Palestinian girl, I don’t feel like my struggle of violence is represented properly in the country,” Azouni says.

She points out that Tala’at is important to Palestinian males as well because it works toward gender equality in different aspects of life, something that is important for a better future.

“Some of our traditions justify violence against women, and we need to end it. It affects the progress of women at work and in many other areas,” she says.

Jalal, a Palestinian activist who asked to not use his last name, is a full supporter of the Tala’at movement and its mission, not only because it calls to end violence against women, “but because the Palestinian society is stronger and healthier if we as humans are all treated fairly and equally, man and woman.”

He says that Palestinian women are stuck between a rock and a hard place – between patriarchy and the occupation, where there’s violence on both sides.

“Their rights are diminished and buried under the dirt, while violence increases against them from all fronts due to this unique situation,” Jalal says.