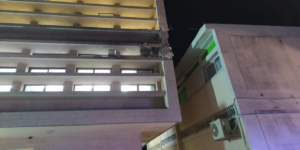 Images from the scene in #Sderot showing the direct impact of the rocket on a civilian building. It’s going to be a hot weekend in the south… pic.twitter.com/X8zmwaqou3

It was also confirmed that the building hit was a Chabad Hesder Yeshiva. It was reportedly empty when the rocket struck.

The IDF confirmed that sirens had sounded and “identified one launch from Gaza into Israeli territory,” it said in a statement, adding that the building hit also housed a synagogue and school.

“As I have said in the past, this situation cannot continue,” he said. “Only a military operation will bring quiet to our area. Our dear citizens are entitled to raise their children in a quiet and routine manner, like the rest of the country.”

Inside this Chabad building in the Israeli city of Sderot, there is a synagogue and a school.

Palestinian terrorists in Gaza fired a rocket directly at it moments ago.

Thankfully, no students were injured by the blast. pic.twitter.com/KE0WuwPqBW

“We will continue to develop this city and be blessed with thousands of new families,” Davidi added.

In the early hours of Thursday morning, a rocket was launched from Gaza but was intercepted by the Iron Dome.

In response, Israel struck a Hamas target in the Strip.

Tensions between Gaza and Israel have increased recently following a consistent barrage of incendiary devices flown over the border from Gaza that has sparked near-daily fires in the south of Israel.

On Wednesday, in response to the incendiary kites and balloons, Israel closed of the fishing zone in Gaza.

There were eight fires in the south of Israel on Wednesday and seven fires were reported on Tuesday.

The IDF was bracing for an escalation in violence on the Gaza border ahead of the usual Friday protests, where thousands of Gazans have protested and rioted along the border fence, burning tires, hurling stones and marbles, and throwing grenades and improvised explosive devices (some military grade) towards troops.

The Great March of Return, as the riots are called, have seen more than 500,000 people violently demonstrating along the security fence demanding an end to the 12-year long blockade.