In Qatar, Abbas says negotiations should resume, but from where Olmert left them, with all final status issues “on the table.”

Palestinian Authority President Mahmoud Abbas on Sunday proposed holding negotiations with Israel for six months, during which time the Israeli government would freeze construction in the settlements. 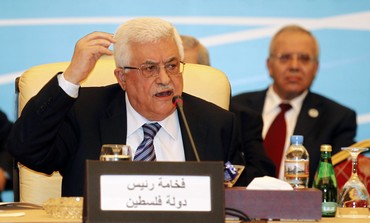 Abbas said that the negotiations should start from the point where they ended during the era of former prime minister Ehud Olmert.

The negotiations would lead to agreement on the core issues and an Israeli withdrawal to the pre-1967 lines, he said.

Abbas was speaking during a meeting of the Arab League in Doha, Qatar, to discuss ways of supporting the PA financially in wake of the UN General Assembly’s vote in favor of upgrading the Palestinians’ status to non-member observer state.

The Arab ministers decided to provide the PA with $100 million per month in light of Israel’s decision to withhold tax revenues belonging to the Palestinians.

Addressing the Arab delegates, Abbas said: “We want to discuss with you a mechanism that would lead to an Israeli withdrawal from the Palestinian and Arab territories, including Jerusalem, the release of Palestinian prisoners from Israeli jails and halting settlement construction. If this happens, there could be feasible negotiations. Also, we could return to the point where we stopped during the era of Ehud Olmert’s government, when we put all the final status issues on the table. We reached many understandings on over these issues.” Abbas said that the two sides reached understandings on the borders, Jerusalem and the refugees.

The PA won’t agree to return to the negotiations from point zero, he stressed.

“[Prime Minister Binyamin] Netanyahu wants us to eliminate the issue of refugees,” Abbas added. “We won’t accept this. We also don’t accept the presence of the Israeli army in the Jordan Valley.” Abbas also called for “keeping the [2002] Arab Peace Initiative on the table. He rejected demands by some Arab countries to abandon the initiative, saying it was the only Arab peace plan since 1948 that says that Arabs wants a real peace.

“This is a very important initiative,” he said. “If we remove it, the alternative would be war, or no peace and no war. Are we ready for war? No, we are not ready for war.” Abbas’s comments came in response to statements by Qatari Prime Minister Hamad bin Jasem al-Thani, who called on the Arabs to reconsider the peace initiative.

Al-Thani told the Arab ministers: “We said from the outset that the Arab Peace Initiative won’t last for ever. We don’t seek peace at any price. For us, peace does not mean capitulation.”

Abbas also cautioned that the PA was on the verge of collapse despite the UN vote in favor of upgrading the Palestinians’ status. Abbas said he would soon head to Cairo to resume reconciliation talks with Hamas. “Reconciliation [with Hamas] is dear to us and the unity of our people,” he explained.