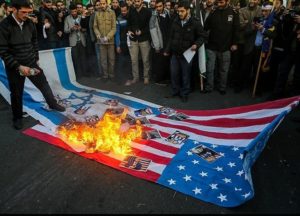 In an article in Germany’s most widely read daily newspaper Bild, Julian Roepcke, the paper’s foreign news editor, argued that Iran’s ‎missile strikes in Syria this weekend “under the ‎auspices of the ‘war on terror’ might sound good, ‎but the opposite is true. The missiles themselves ‎are a message of terror, because they carry ‎inscriptions reading ‘Death to Israel and ‘Death to ‎the USA’ – and that is deadly serious for the ‎mullahs.”‎

Iran’s missiles, he continued “were not fired against ‎Islamic State, but rather against those who stand in the ‎way of the corrupt regime in Tehran, against those ‎who do not want to stand idly by as Iran’s leaders, again and again, call for the ‘extermination’ of ‎Israel. By the mullahs’ crazy logic, ISIS is also ‎the creation of the heinous West, the U.S. and ‎Israel,” he wrote.

‎”Iran cannot be an ally at this time, neither in the ‎‎fight against terrorism nor as an oil supplier or ‎‎trade partner,” Roepcke concluded.‎

The United States pulled out of a 2015 nuclear ‎agreement with Iran earlier this year and subsequently reimposed ‎economic sanctions on the Islamic republic. Since ‎then, the European signatories to the accord – ‎Britain, Germany and France – have been trying to ‎come up with ways to salvage the agreement, chiefly ‎a mechanism that would allow for trade with Iran to ‎continue despite the American sanctions.‎

The Bild is Germany’s most widely circulated daily, ‎printing 2.7 million copies a day. Between its ‎various platforms, the paper, which is considered ‎pro-Israel, has an average daily readership of 12 ‎million. ‎