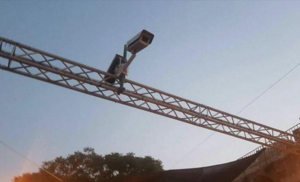 Peace & Quiet at the Dome of the Rock on the Temple Mount as Waqf clerics continue to reject security measures. – Ynet

The cameras can identify anyone who tries to enter the holy site with knives, weapons, hand grenades or other suspicious items.

But worshipers who arrived at the Gate of the Tribes for morning prayers refused to enter the Temple Mount and threatened to continue their violent struggle, rejecting any form of compromise. As a result, the Al-Aqsa Mosque was empty on Sunday morning, with its doors closed.

“We will not agree to the new inspection,” several of the worshipers clarified. “Our struggle will continue without interruption at all hours of the day.”

One of the sheikhs who arrived at the scene said that “the new measure is worse than the metal detectors,” without elaborating.

“We will not agree to any inspection,” the sheikh continued. “We will meet today and decide on our next steps.”

Mahmoud, a resident of east Jerusalem who came to pray, said that he feels like the Israeli government and the police are “making fun of” the Muslim faithful.

“We will not agree to enter the Al-Aqsa Mosque through an inspection,” he said. “We are not criminals who should be humiliated. The government and Public Security Minister Gilad Erdan must stop making stupid decisions. They’re just making things worse.”

Another worshiper who came to pray at the holy site claimed the Israeli government “is not interested showing respect” to the worshipers.

“They insist on that we pass through inspection but it’s not going to happen,” he asserted. “The protests will continue and we’ll sacrifice our lives for the Al-Aqsa Mosque. Whatever the outcome of the struggle will be, we are willing to pay with our lives.”

US President Donald Trump’s envoy to the Middle East Jason Greenblatt, special advisor Jared Kushner and US Ambassador to Israel David Friedman are all working behind-the-scenes with the Prime Minister’s Office in an effort to reach a compromise that would calm the tensions and end the crisis. Palestinian President Mahmoud Abbas and the Jordanians are also involved in the talks.