‘Samir’, a Muslim Arab from the Galilee, may hide his uniform & weapon from his neighbors, but is still proud to be an IDF combat soldier.

He is a combat soldier in the IDF, but when he goes home to his village in northern Israel, Samir (alias) has to change out of his uniform and hide his weapon. A Muslim Arab who chose to volunteer for army service, Samir and his family can expect nothing but hostility if his neighbors find out about his military career.

“I love the army,” he says. Samir, 26, serves in the Tavor battalion, one of the Home Front Command‘s search and rescue battalions whose men also perform combat activities in addition to their rescue efforts.

“If I was born and raised in Syria, I would have served in their army. But I live here, so I decided to do my part and enlist,” he says. But in Samir’s village army service is not generally accepted. The few who volunteered before Samir are still the target of harassment, and lately one of them was assaulted by his neighbors. But that doesn’t faze Samir. “When I decide something, when it’s in my sights, I do it all the way,” he declares.

A married father of one, Samir also had to persuade his wife to support his choice. “It is not simple,” he admits. “My wife opposed my enlistment; she wanted her husband close to home. But she came around in the end. She said she’ll suffer through it as long as I’m happy. She and my parents were the only ones who supported my decision.” 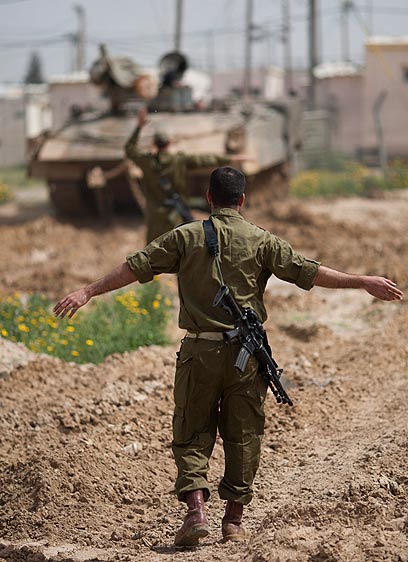 Samir has to hide his identity – Illustrative: AP

Samir joined the Tavor Battalion nine months ago. “To my delight my commanding officers understood me and my situation and let me go on leave on weekends,” he told Yedioth Ahronoth. His comrades were equally supportive. “Even though they are only kids, 18 years old, we have developed a true friendship,” Samir says. He stresses he has never encountered racism.

Due to the high sensitivity of his situation, Samir wanted to avoid giving away any information that might identify him or his place of residence. His commanders took this under consideration and allow him not to wear the army uniform outside of base.

Samir is set to serve for only two years, due to the late age in which he was drafted, but will be happy to pursue a military career later on. “I’m in a good place,” he says. “If I can continue in the regular service, I will. If not, I will try and join the civilian emergency services: police or fire brigades.”

Despite the difficulties and fears, Samir calls on Muslim youths to follow in his footsteps. “If you love this system, I definitely recommend it,” he says. “It’s very gratifying.”