Gaza’s Ark, a “protest” boat that was preparing to breach Israel’s naval blockade of Gaza, which is ruled by the terrorist organization Hamas, was sunk in a mysterious explosion on Tuesday. 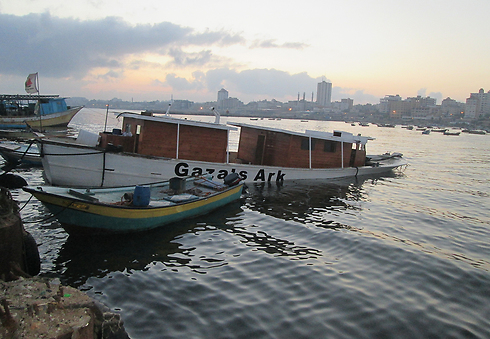 The blast occurred in Gaza City’s port, and was preceded by an anonymous telephone call warning the guard of the ship that it was about to be blown up, organizers of the “protest” project told AFP.

The ship, a large fishing vessel which was being readied to challenge Israeli naval authority in June, sustained major damage and sunk in the shallow waters of the port, leaving three-quarters of it submerged.

“An anonymous caller phoned the guard and told him to leave because they were planning to destroy the boat. He was very afraid and ran away,” said project manager Mahfouz Kabariti, adding that the guard was unharmed.

“We blame Israel because we have had very bad experiences with them in the past when they destroyed several solidarity boats,” continued Kabariti, referring to the mysterious damaging of two boats in Greece in 2011, which similarly were planning to challenge the blockade.

Kabariti added “we are convinced Israel did it because we were preparing for a test run next week, with the main voyage planned for June 15.”

Mustafa Abu Awad, the 25-year-old guard who was on duty at the time, told AFP “I was sleeping near the boat and someone phoned me – an unidentified caller. I answered and he told me: ‘Mustafa, leave the boat right now because we are going to blow it up.’ I asked him who he was, but he hung up.”

More than a year of anti-Israel efforts, all for naught

Gaza workers and foreign anti-Israel activists have been working for over a year to fit out the boat to carry goods and more than 100 passengers, in the latest attempt to challenge Israel’s legal naval blockade on the terrorist organization Hamas.

“Gaza’s Ark” was intended to challenged restrictions not allowing ships from Gaza to go beyond six nautical miles from shore.

“Gaza’s Ark and all our partners in the Freedom Flotilla Coalition are considering our next move in response to this cowardly act of terrorism,” said anti-Israel activist David Heap.

“But our position remains clear – neither this nor any other attack will stop our efforts to challenge the blockade of Gaza until it ends,” added the activist.

Fellow activist Ehab Lotayef joined in, saying “Freedom Flotilla boats have been sabotaged before… You can sink a boat but you can’t sink a movement.”

Back in October it was reported that members of Canada’s extreme left were behind a large part of the financial backing of “Gaza’s Ark.”

At the time anti-Israel groups in Canada, which include far-left Jewish groups, were reported to be funding the ship in its attempt to have the ship sail from Gaza carrying locally manufactured goods. At the time approximately half of the required $300,000 had been raised.