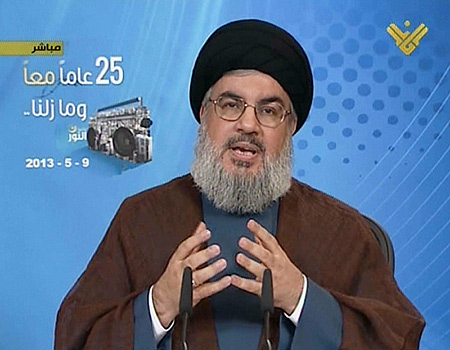 “I will go myself to Syria if it is so necessary in the battle against the takfiris (radical Sunni Muslims), Hezbollah and I will go to Syria” to fight rebels trying to oust the Damascus regime, Hassan Nasrallah declared in a speech broadcast on television in Lebanon.

While Lebanese president Michel Sleiman was quick to blame Israel for Thursday’s attack, Nasrallah admitted that Israel had not been behind it.

“Up to this point, it has been shown, according to available information, that [the people behind the recent car bombing in Beirut] belong to a certain Takfiri movement and their operators are known,” Nasrallah said, according to the Lebanese Daily Star.

“Some of them are Lebanese, Syrians and Palestinians, unfortunately,” he added.

“You, the pig Hassan Nasrallah, we send you our second powerful message because you haven’t understood yet,” said one member of the group, which called itself the Company of Aisha Umm al-Muminin, the Prophet Mohammed’s favorite wife.