National Poll: 45% of Israelis support unilateral withdrawal from most of the West Bank

Rafi Smith poll: 80% of Israelis support IDF presence in West Bank in the case of unilateral (civilian) withdrawal until ‘peace agreement’ is signed.

Almost half of the Israeli population supports a unilateral withdrawal from large sections of the Palestinian territories based on the pre-1967 lines, according to a poll conducted by Rafi Smith for the Blue White Future movement. 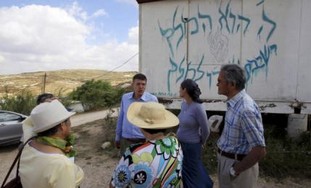 The poll was released ahead of an election debate between the “Zionist parties” hosted by the movement at Tel Aviv University on Sunday.

Forty-five percent of respondents answered they would back a unilateral withdrawal while maintaining the large settlement blocs including western Samaria, Kedumim, Jerusalem, Ma’aleh Adumim and Gush Etzion.

Eighty percent of respondents supported leaving an IDF presence in the West Bank in the case of unilateral withdrawal until a final status agreement is signed.

All United Torah Judaism supporters answered “yes” to this question, while on the other side of the political spectrum, 64% of Meretz supporters also answered in favor of IDF security measures.

Seventy-six percent of those surveyed supported the principle of compensating settlers who agree to evacuate voluntarily, with 95% of both Yesh Atid and The Tzipi Livni party supporters favoring this idea.

Meanwhile, 68% of respondents backed early preparations by the state to absorb settlers now living east of the security barrier, in order to facilitate implementation of the process, down 10% from the June survey. This decrease was mostly attributed to right-wing and Orthodox respondents.

The percentage of Bayit Yehudi supporters who answered in favor of unilateral withdrawal rose by 16% since June to 41%.

Co-chairman of the Blue White Future movement Gilead Sher said that the Israeli public is beginning to internalize the idea that a Jewish democratic state requires withdrawing from the Palestinian territories, with or without an agreement.

“It is the duty of a responsible government – any government – to promote the reality of two states for two peoples as a clear interest for national security,” Sher stated. “The status quo and the ineffectiveness of the current government is leading to the end of Zionism, which established in Israel the national and democratic home of the Jewish people.

“We must curb the danger of a binational or unequal state through one-sided constructive steps,” he continued. “The government must prepare, with courage and responsibility, the infrastructure along the security barrier while conducting controlled, responsible and planned evacuations from settlements located outside the settlement blocs, and to successfully absorb those forced to evacuate in order to maintain a Jewish, democratic, legitimate and secure Israel.”