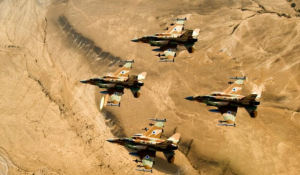 The officials, quoted anonymously by NBC, said an Israeli strike on the 47th Brigade base near the city of Hama used F-15 fighter jets and targeted weapons recently delivered from Iran.

It was the first time US officials have said Israel carried out the strike, although officials similarly ascribed responsibility to Israel for another Syrian strike targeting Iranian forces weeks earlier.

Israel does not comment on reported air strikes in Syria, but is said by foreign officials and war monitoring groups to have carried out dozens in recent years.

Israeli officials have repeatedly said they will not allow Iran’s military consolidation in Syria or allow weapons to be transferred to Lebanon’s Shiite militia, Hezbollah.

The US officials said that the strike near Hama destroyed ground-to-air missiles delivered to the base by Iran.

Israel and the US have recently expressed concern about an uptick in cargo flights between the two countries, particularly after Iran’s repeated threats of retribution over the alleged Israeli strike on April 8, which also killed several Iranians.

When asked recently if he believes the flights are carrying Iranian weapons, US Defense Secretary James Mattis replied that he “can’t think of any other purpose for them right now.”

The officials quoted by NBC said that Israel destroyed weapons including ground-to-air missiles in the Sunday strike, although previous reports had suggested that it was ground-to-ground missiles that were taken out.

The officials were further quoted by the network as saying that it appears Israel is tilling the ground for a war with Iran, with which it has had hostile relations with since the Islamic Revolution of 1979 overthrew the autocratic Shah.

Israeli Defense Minister Avigdor Liberman returned to Israel on Monday after several days in the US, where he met top defense officials.

The hawkish defense minister said after his return that Israel will do “everything it needs to do” to tackle Iran.

“They are trying to attack us and we will give an appropriate answer,” he added.

Moments earlier, his Iranian counterpart Amir Hatami had vowed a “surprising and regrettable” response to Israel if it did not stop its “dangerous behavior.”

While the prospect of open conflict between Iran and Israel over Syria has been growing for months, the current round of hostilities was sparked in February when an Iranian drone — which Israel later said was bristling with arms — entered Israeli airspace.

The Israeli air force responded with a barrage of air strikes on targets, including some belonging to Iran.

It was the first time Israel had openly admitted to carrying out an air strike inside the country, which has been ravaged by a civil war since 2012.