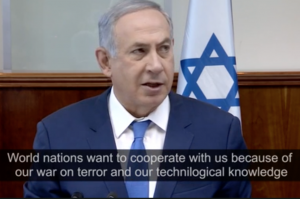 Five years after Turkey blocked past invitations, this move represents a significant upgrade for Israel’s ties to the 28-nation NATO.

Prime Minister Benjamin Netanyahu announced Wednesday that Israel would accept an invitation from the North Atlantic Treaty Organization (NATO) to open a permanent office at its Brussels headquarters, a move Turkey claimed it had blocked some five years ago.

The move represents a significant upgrade for Israel’s ties to the 28-nation NATO. Israel is currently a partner in NATO’s Mediterranean Dialogue, along with six other countries on the Mediterranean: Egypt, Algeria, Tunisia, Jordan, Mauritania and Morocco.

“This is something we worked on for many years,” Netanyahu said at the start of the weekly cabinet meeting.  “I think this is important to Israel’s standing in the world.  The countries of the world want to cooperate with us because of our determined struggle against terrorism, because of our technological knowledge, our intelligence deployment and other reasons.”

Late Tuesday night the Foreign Ministry said that NATO  informed Israel that it would be able to open an office at the organization’s headquarters and complete the process of accepting the credentials of its representative to NATO.

“The announcement comes after lengthy Israeli diplomatic efforts by the Foreign Ministry, the Defense Ministry and the National Security Agency. Israel wants to thank its allies in the organization for their support and efforts on the issue,” a Foreign Ministry statement said.

In September 2011, then Turkish Foreign Minister Ahmet Davutoglu told the Turkish media that his country had succeeded in blocking an Israeli attempt to open an office at the NATO headquarters.

“Israel recently made an attempt to open an office at NATO [headquarters] in Brussels. We said we would veto this attempt and the issue was not even put on the agenda,” he said at the time, when tension between Jerusalem and Ankara was at its fever pitch because of the Mavi Marmara incident that happened the previous year.

Because of the Mavi Marmara incident, Turkey – a NATO member – blocked Israel’s participation in various NATO meetings and maneuvers.  Nevertheless, Israel’s cooperation with the western alliance did continue to develop, particularly in areas dealing with counter-terrorism.

Netanyahu called the move an “important step” that will enhance Israel’s security.

NATO’s treaty obligates the member states to militarily defend one another in time of attack, but that does not extend to the alliance’s some 40 partner countries.