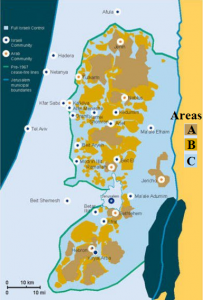 The expansion plan fits into the contours of an emerging US effort to resolve the Israeli-Palestinian conflict as part of a vision of a wider peace deal that would involve some of the Sunni Arab states.

The US wants Israel, the PA and some of the Sunni Arab states to take steps to benefit one of the other sides of this triangle, thereby significantly improving the atmosphere to facilitate the renewal of negotiations.

Washington is believed to be pressing Israel to “moderate” settlement construction and enable more Palestinian development in Area C. The White House is also pushing the Palestinian Authority to end payments to terrorists in Israeli prisons as well as their families and to halt incitement.

Trump has also reportedly asked Saudi Arabia to lift its ban on the overflight of Israeli planes headed east, a move that would reduce the travel time bertween Israel and places like India and China.

Right-wing politicians are up in arms over the idea of expanding Palestinian cities into Area C, viewing such a move as a de facto transfer of that territory to the PA.

Its clear that once those cities are given territory in Area C, that land would not be part of Israel’s borders in any final status agreement with the Palestinians.

Late Wednesday, the Prime Minister’s Office confirmed a report on Channel 2 that the security cabinet in 2016 authorized 14,000 new homes for Kalkilya allowing it to expand into Area C.

Area C is under Israeli military and civil control.

On Thursday, Environment Minister Ze’ev Elkin wrote to Netanyahu explaining that the Kalandiya plan was never approved by the Security Cabinet.

Prior to Trump’s visit last month, the Security Cabinet also approved Area C construction for Palestinians, but very few details were made public.

“Construction in Beit El must come first,” Regev said in a video statement to the press.

“Only after that can we discuss the housing crisis in Kalkilya. Our rights over Judea and Samaria are not theoretical, and it must be expressed by building freely throughout Judea and Samaria. I expect that in our next meeting we will authorize marketing thousands of housing units in Judea and Samaria.”

Justice Minister Ayelet Shaked also expressed vigorous opposition to the plan Thursday, noting that she and her ally, Bayit Yehudi chairman Naftali Bennett, voted against it in October 2016 when it was approved.

Defense Minister Avigdor Liberman warned in response that Bayit Yehudi’s appetite in the settlements had grown too great.

Speaking in an interview with the haredi (ultra-Orthodox) radio station Kol Chai, he noted that in 1992, when the right-wing Tehiya Party helped topple former Likud prime minister Yitzhak Shamir, he was replaced by Labor leader Yitzhak Rabin, who ended up signing the Oslo Accords.