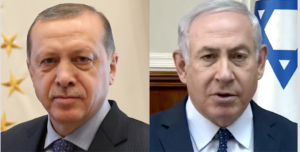 Erdogan said the new Nationality Law, which declares that only Jews have the right of self-determination in Israel, legitimized oppression and showed that Israel is a fascist and racist country.Netanyahu replied: “Erdogan is massacring the Syrians and the Kurds and is jailing thousands of his own people. This great democrat’s criticism of the Nationality Law is the greatest compliment it could be paid.”

Speaking to members of his ruling AK Party in parliament, Erdogan said the law showed Israel was “the most Zionist, fascist and racist country in the world,” and called on the international community to mobilize against Israel.

“The Jewish nation-state law passed in the Israeli parliament shows this country’s real intentions. It legitimises all unlawful actions and oppression,” Erdogan said.

“There is no difference between Hitler’s Aryan race obsession and Israel’s mentality. Hitler’s spirit has re-emerged among administrators in Israel,” he said.

Erdogan said Israel had shown itself to be a “terror state” by attacking Palestinians with tanks and artillery, adding that the move would “drown the region and world in blood and suffering”.

The law, backed by Israel’s right-wing government, passed through the Knesset on Wednesday after months of political argument.

“This is a defining moment in the annals of Zionism and the history of the state of Israel,” Netanyahu had told the Knesset.

With the press already invited & stationed to photograph the ‘event’, Israel’s Ambassador to Turkey, Eitan Na’eh, who has ‘full diplomatic status’ is forced to go through strict security at Istanbul’s airport as he’s being expelled. – Screenshot

Turkey and Israel, former allies, expelled each other’s top diplomats in May during a row over clashes in which dozens of Palestinians were killed by Israeli forces on the Gaza border. However, the two sides continue to trade with one another.

The two countries have long been at loggerheads over Israel’s policy towards the Palestinians and Jerusalem’s status. Erdogan has called for a summit of Muslim leaders twice in the past six months after US President Donald Trump decided to recognize Jerusalem as Israel’s capital.