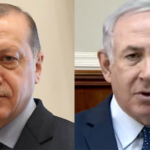 Erdogan said the new Nationality Law, which declares that only Jews have the right of self-determination in Israel, legitimized oppression and showed that Israel is a fascist and racist country.Netanyahu replied: “Erdogan is massacring the Syrians and the Kurds and is jailing thousands of his own people. Continue Reading »