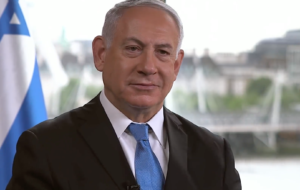 Netanyahu had been slated to meet with South American heads of state during the August 6-9 trip to Bogota for the swearing-in of Colombia’s new president Ivan Duque.

The trip would have been Netanyahu’s second to Colombia within a year, and came as Israel attempts to forge bonds with new allies in Europe and South America to bolster exports and much-needed diplomatic support in international forums.

But the trip was nixed Thursday amid reports of progress in an Egypt-mediated agreement to end more than a month of volatility between Israel and Gaza, marked by a resurgence in cross-border arson attacks and violent clashes along the security fence.

The launching of thousands of kites and balloons affixed with incendiary devices, namely Molotov cocktails, has become a ubiquitous tactic in weekly protests on the border since March 30, quickly becoming a popular way for protesters to inflict costly destruction on Israeli land without putting themselves in danger.

Israel and Hamas were brought to the brink of a full-scale war in two separate military flare-ups in July over the “fire kites” as Israel struck targets in response to the attacks, prompting several barrages of Hamas rocket fire and retaliatory Israeli airstrikes that marked some of the fiercest clashes since 2014.

The first, on July 14, saw dozens of Israeli air strikes that killed two Palestinians, while some 200 rockets and mortar rounds were fired from the enclave at Israel in response.

On July 20, Israel unleashed a wave of strikes across the territory after a soldier was shot dead on the border. Three Hamas militants were killed in the strikes.

A ceasefire brokered by Egypt and UN officials last month resulted in a drop in tensions and saw the number of firebombs being launched over the border diminish.

A previous ban on fuel deliveries last month had resulted in warnings from UN officials that emergency fuel supplies were running low and the shortage was beginning to affect hospitals and water sanitation.

Israel closed the crossing to most deliveries on July 9 in response to the firebombs and border tension before tightening the blockade to cover fuel on July 17.

It lifted the fuel ban a week later. Deliveries of food and medicines have continued throughout.

Israel controls all access to and from the Gaza Strip apart from a single crossing with Egypt.

It has fought three wars with Palestinian militants in Gaza since 2008 and says the blockade is necessary to prevent Hamas and other terrorist groups from smuggling weapons and other military equipment into the Strip.

UN officials have called repeatedly for the blockade to be lifted, citing deteriorating humanitarian conditions in the territory, where some 80 percent of the two million population depend on aid.