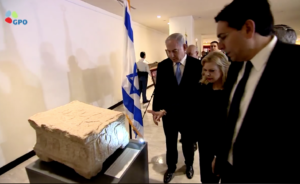 Titled  “3,000 Years of History: Jews in Jerusalem,” the exhibit was initiated by UN Ambassador Danny Danon and MK Zeev Elkin (Likud), Minister of of Jerusalem and Heritage and Environmental Protection.

Among the archaeological finds on display in the UN headquarters are a 1,700-year-old seal “belonging to the governor of the city” found in the Western Wall Plaza, a seal bearing the name of King Hezekiah from the 8th century BCE and a 7th century BCE seal with the inscription “the fifth to Netanyahu, his sons and his relatives.”

Side by side with these archaeological wonders were also fragments of the famed “2000-year-old Dead Sea Scrolls,” which the exhibit describes as bringing to the world “an original voice of the much older writings that morally guided humanity for more than two millennia.”

The ancient texts were initially discovered in a series of twelve caves around the site known as Wadi Qumran near the Dead Sea in the West Bank between 1946 and 1956 by Bedouin shepherds and a team of archaeologists.

Some experts have argued that the manuscripts were the product of Jews living in Jerusalem, who hid the scrolls in the caves near Qumran as they were fleeing Roman persecution.

“Walking along the walls,” literature from the event proclaims, “one will find themselves observing not only the remarkable part of the history of Israel and the Jews, but also aspects in the history of mankind.”

“Bringing moral – social, juristic, economic and political – values to the world; fighting for freedom; struggling against oppression and tyranny; offering a hand to those in need – it is all reflected on these walls, in this building that made these values a foundation of its existence,” the literature adds.

Other ancient treasures presented at the exhibit included the Tel Dan Stele, dating back to the First Temple Period around the 8th century BC; an incised menorah and “Temple Altars likely to have been made by artists” in the 1st century BC; and a Second Temple period artifact containing a tomb inscription dedicated to Uzziah, the former king of Judea.

After viewing the exhibit, which will run for five days, Netanyahu noted a disclaimer the UN placed at the entrance.

The sign read, “The content of this exhibit is solely the responsibility of the sponsors. The holding of the exhibit in UN premises does not imply endorsement by the United Nations. Please direct any queries to the organizers.”

Netanyahu said he had two comments on the UN disclaimer.

And his second point is that “this exhibit would not have been possible two years ago, and this exhibit will not be necessary 10 years from now.”

A person who described himself as an employee of the United Nations later told reporters that all exhibits are presented with the same disclaimer.

The employee refused to provide his name or job title to reporters upon request.

Netanyahu came to the exhibit after meeting US Ambassador to the UN Nikki Haley in her office. “Talk about a tailwind for Israel,” Netanyahu quipped. “We call her Hurricane Halley, she does magnificent work for truth and for Israel here at the UN.”

PM Benjamin Netanyahu met with US Amb. to the UN Nikki Haley and said at the start of the meeting: “It’s good to see you again. You’re making everything better.” – Screenshot: GPO

Netanyahu thanked Haley at the outset of their meeting for her strong defense of Israel, saying she and US President Donald Trump bring the truth and defense of Israel into “these cloistered halls that are drenched with anti-Israel venom.

Haley said that she was amazed at the abusive behavior toward the UN in the past, and said she “felt bad” with what UN Ambassador Danny Danon had to put up with.

“But it is actually starting to get a little bit better,” she said.”They don’t want to get yelled at.”

Netanyahu urged her to “continue yelling,” to which she replied, “that’s what I do.”

Minister Elkin also said he was pleased that Israel “succeeded in showing – here at the UN – the unvarnished truth.”

“The Jewish people’s more than 3,000 years of history in Jerusalem winot be gainsaid by any ridiculous UN decision. Our message here is both strong and clear,” the senior official said.