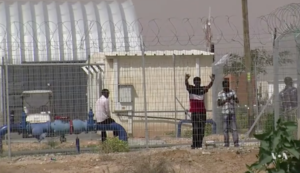 Netanyahu took advantage of his recent trip to New York, where he delivered an address to the U.N. General Assembly, to meet African leaders. During their meetings, Netanyahu amended Israel’s agreements with the leaders so as to allow illegal infiltrators to be deported from the country, forcibly if necessary. This would allow the state to continue its deportation procedures and constitutes an important tier in the government’s efforts to find a solution to the issue of migrants residing in the country illegally.

Since 2014, Israeli has implemented a “carrot and stick” policy aimed at encouraging illegal infiltrators who did not apply for refugee status or whose applications were denied to agree to leave the country. Infiltrators who leave the country voluntarily receive a $3,500 grant, while those who refuse the grant are taken to the Holot detention facility in Israel’s south. In the years since the implementation of the policy, some 15,000 infiltrators have left the country.

This procedure is based on agreements with countries in Africa that agreed to take in the infiltrators on the condition they are not forcibly expelled.

Following a petition by several human rights organizations, the High Court of Justice in August issued a controversial ruling, which held that Israel could not hold the migrants in detention facilities for more than 12 months in an effort to convince them to leave.

As critics of the ruling noted, by preventing their prolonged detention, the court in effect acted to prevent the policy’s implementation.

The agreements with the African countries will allow Israel to implement various restrictions on migrants that refuse to leave the country, and will in effect serve to invalidate the restrictions imposed by the High Court on the matter.

The amended agreements will allow the state to continue its deportation policy even more forcefully, and as a result, bring the country closer to a solution to the strategic problem presented by the migrants.

Until the High Court’s ruling, the policy had proved successful. Until 2012, thousands of migrants had entered Israel through the border with Egypt. The height of the infiltration occurred in 2011, when 17,268 entered the country illegally. However, there has been a steep decrease in infiltration following the completion of the border fence and the amendment of laws pertaining to migrants. Since 2013, only several dozen migrants have entered Israel illegally.

The legislation on the government’s migrant policy has come under constant attack by left-wing organizations, which have systematically petitioned the High Court. The High Court’s rulings in response to the petitions have drawn increasing criticism from the public for what it sees as the court’s unauthorized involvement in the discretionary decisions of the political echelon.