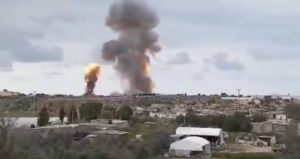 “Yesterday we attacked in several arenas; we attacked in Syria, we attacked in Gaza, and we are now hitting with planes, tanks, and helicopters. We’ll continue to strike until the quiet returns. I have a message to the leaders of the terror organizations: If the quiet doesn’t return, you’re next in line,” the Prime Minister said.

An IDF spokesman said 50 launches were fired from Gaza into Israeli territory during the day, about 90% of which were intercepted.

Before that, Defense Minister Naftali Bennett visited Gaza and met with regional leaders in the Sderot Community Center.

“I ended a meeting with residents and council heads in Sderot and the Gaza area. In the last day, we’ve hit Islamic Jihad bases and eliminated Islamic Jihad terrorists in Gaza as well as in the Damascus area. We hit them wherever they are and not just whoever shoots at us.”

“We don’t want a broad campaign but we’re preparing a plan and if there’s no choice we’ll run a tough campaign. We won’t let the enemy know when and won’t let him know where. We’re committed to security for residents of the Gaza envelope,” Bennett added.

Earlier, Prime Minister Binyamin Netanyahu held a security consultation with the Shin Bet and the National Security Council head at a security facility in the center of the country.

Earlier, Netanyahu toured the city of Ariel, saying: “We attacked both Gaza and Syria last night. I do not intend to let it go. We’ll continue today. Beyond the harsh blows we’re inflicting on our enemies, Hamas and Islamic Jihad need to understand, it won’t continue this way. If they don’t stop the fire completely – and I don’t mean a day or two, but completely, if there’s no complete break – we’ll be forced to go with the broad campaign plan we prepared.

“These aren’t just words; there are new, surprising aspects that didn’t exist either in Operation Cast Lead, or in Defensive Shield or in Protective Edge, and everyone in the Cabinet knows exactly what we’re talking about. The campaign, it could be a war, is a last resort. I’m in no hurry to go there. I know the price our soldiers and the families of the fallen pay. It’s a last resort, but if there’s no choice, we’ll go there.”

Netanyahu added: “Alas for Hamas and alas for Islamic Jihad when they arrive at that day. We’ll do what’s necessary to restore absolute security to the people of the South.”

The last 24 hours in Israel: pic.twitter.com/0YNwvMsYvL