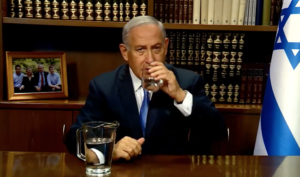 About two weeks ago, the Israeli leader posted a video in which he offered to help solve a serious water crisis in Iran. As he filled a glass with water, Netanyahu said Israel wanted to make an unprecedented offer to the people of Iran in the field of water management, because the lives of more than 50 million Iranians are threatened by mismanagement that the prime minister blamed on the “cruel “Iranian regime.

But disdain for the Iranian regime would not curb the respect and friendship between the people of Iran and Israelis, Netanyahu continued. He announced that the Israeli government had opened a website in Farsi where Israeli water innovations would be presented and taught to the Iranian people.

Netanyahu’s video was published prior to the demonstrations in southern Iran against the regime’s mishandling of the water situation. Local media reported that numerous Iranians had been poisoned last week alone by drinking contaminated water.

An Iranian general later tried to turn the tables by blaming Israel for the lack of rain in Iran. He claimed that the Jewish state had manipulated clouds and had stolen snow from the mountains in the Afghan border region (no joke).

“Israel and another country in the region have joint teams which work to ensure clouds entering Iranian skies are unable to release rain,” Brigadier General Gholam Reza Jalali, head of Iran’s Civil Defense Organization, told reporters. He then said Israel was responsible for the disappearance of snow from mountain tops above 2,200 meters (7,216 feet) in Iran.

“All mountainous areas between Afghanistan and the Mediterranean are covered in snow, except Iran,” Reza Jalali was quoted as saying by The Times of Israel.

On Monday evening, Netanyahu posted another video, this one encouraging the people of Iran to continue their courageous fight against tyranny. He stressed that while the people of Iran were suffering from various crises, their Islamist regime was squandering the nation’s wealth on supporting terrorism across the Middle East.

Experts say that Netanyahu’s public relations offensive is taking advantage of a new trend in Iran that’s seeing average Iranians no longer willing to swallow the anti-Israle propaganda of the regime. Last week, this trend was clearly visible when demonstrators took to the streets in an unknown Iranian city and chanted “Death to Palestine” and “Not Lebanon and Gaza, but the Iranian people.”

The spectacle demonstrated that the Iranian people do not accept their regime spending billions of dollars exporting its “Islamic Revolution” to the rest of the Middle East.

In addition to Netanyahu’s video clips, the Israeli government is also using social media platforms like Instagram to send messages of peace and practical assistance (like water conservation tips) in Farsi to the Iranian people. The “new media” methods being employed by Israeli officials constitute a kind of reverse psychology, according to Iran expert Alireza Nader.

It’s too early to tell if Netanyahu’s ‘Iran offensive’ will work, but it has already inspired one of Iran’s proxies to mimic the strategy in an effort to influence Israeli opinion.

Hamas’ military arm, Izz-a-Din al Qassam, is reaching out to the Israeli public by publishing Hebrew language messages on its website such as “Leah: Netanyahu doesn’t care about bringing Hadar back.” The message, in fluent Hebrew, refers to Netanyahu’s refusal to engage in another prisoner swap with Hamas to bring home the remains of Leah Goldin’s son, Hadar, whose body has been held by Hamas since the summer 2014 war between Israel and the Gaza-based terror organization.

Hadar Goldin and Oron Shaul’s bodies are still being kept from their families  by Hamas.

Leah Goldin has been highly critical of the Israeli government’s policy not to engage in talks with Hamas, which hopes it can get other Israelis to follow suit.