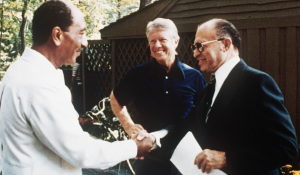 President Abdul-Fatah al-Sisi’s initiative of revamping Egyptian educational textbooks towards its peace with Israel will hopefully bring about a positive attitude towards Israel.

Jerusalem – Textbook introduced this semester by the government of President Abdul-Fatah al-Sisi requires Egyptian pupils to memorize the provisions of the 1979 Egypt-Israel peace treaty and delineate the ”advantages of peace for Egypt and the Arab states.”

The assignments from the ninth grade book, The Geography of the Arab World and the History of Modern Egypt, are part of a change to a more robust and positive treatment of peace with Israel than that manifested in books during the three decades in power of al-Sisi’s predecessor Hosni Mubarak.

Ofir Winter, a research fellow at the Institute for National Security Studies in Tel Aviv, who recently authored a study of the book, termed it ”the first buds of development” in Egyptian educational attitudes towards peace.

”This is not a revolution but the changes are interesting,” he told The Media Line.

”The trend is positive but there is still a great deal to aspire to.” Winter compared the new book to a 2002 Mubarak-era textbook, History for High School Pupils, and found more explicit support for peace with Israel than in the past and more emphasis on the economic advantages of peace. At one point the new book says peace had enabled ”the promotion of economic and social development and the repair of the country’s infrastructure.”

While the 2002 textbook allotted 32 pages to wars with Israel and three to peace, the new one curtails the history of the conflict to 12 pages while allocating four to peace.

Another change is the inclusion of a photograph of the signing of the peace treaty at the White House at which Israeli Prime Minister Menachem Begin is seen alongside Egyptian President Anwar Sadat and US President Jimmy Carter. ”In the past, even when they spoke of the peace treaty, they hardly ever spoke of Israel,” says Winter. ”Israel’s presence was marginal. Now there is a picture and you see the Israeli partner.

This is an interesting and good symbolic innovation.” But some indications of enmity and perceptual gaps remain, especially in terms of the history of the conflict. Like in the older textbooks, Israel/Palestine is depicted historically as land stolen from its Arab residents and Zionism as a threatening colonialist project.

The wars of 1956 and 1967 are seen as reflective of Israel’s intention to expand ”from the Nile to the Euphrates” and to take over the entire Arab world. A map depicting the results of the 1948 war shows all the territory under Israeli control as ”occupied land.”

”This couldn’t turn into an Israeli textbook about the wars. There is no adoption of the Zionist narrative,” Winter says.

Israeli analysts say that shared enmity towards the Hamas rulers of the Gaza Strip is helping to bring the two countries closer.

But direct ties with Israel are still frowned upon within Egyptian society. In March, more than two-thirds of the Egyptian parliament’s members voted to oust MP Tawfiq Okasha after he hosted a dinner for Israeli ambassador Haim Koren.

Winter believes the textbook changes reflect a growing awareness in Egypt that peace with Israel is a valuable strategic asset, especially when it comes to the economy. Conversely, hostility towards Israel and heated pronouncements about the conflict are seen as providing fertile ground for Islamic extremism, he says.

”Today al-Sisi is busy primarily with stabilizing his regime and there are two elements that can influence this: economics and security. The relationship with Israel and the peace are important anchors for both of these.” However, Winter believes that the treatment of Israel in Egyptian textbooks will not improve further as long as Israel’s conflict with the Palestinians continues.

And he cautions that in the age of social media, there are many influences besides textbooks in shaping the views of young people.

Still, the Israeli foreign ministry is enthusiastic about the changes. ”We view all this as very positive,” said spokesman Emmanuel Nahshon. ”It is an extremely important demonstration of good will. We hope it will have a positive impact on younger generations as we look ahead at the next years and decades.”

Eli Shaked, former ambassador to Egypt, also praised the changes in remarks to The Media Line. ”There was always a claim by the opposition in Egypt that the peace is between the leaderships and not the peoples,” Shaked said.

”In many ways it was right because from childhood the people got a very distorted picture of Israel and the Jews coming from the Koran, from textbooks in schools and from newspapers, even semi-official ones and from the mosques where preachers often used negative expressions about Israel and the Jews.

Everywhere that ordinary people looked they saw a negative picture.

This change might be a new approach, new tidings, new winds, new voices that Israel would like very much to hear.”