For years, medical researchers have been working to preserve fertility in female cancer patients. Scientists testing an experimental chemotherapy drug at the Sheba Medical Center, have been successfully preventing damage to fertility.

One of the greatest fears of younger women who have to undergo chemotherapy to fight tumors is possible fertility damage. But the mechanism responsible for the destruction of the eggs in their ovaries and the resultant infertility has not been understood until now. 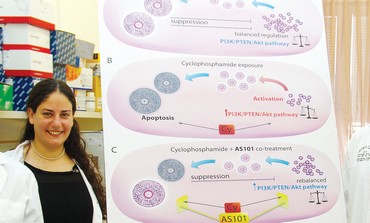 A new Israeli study, published today in the prestigious journal of the American Association for the Advancement of Science, Science Translational Medicine, has discovered the working of this mechanism and proven that treatment with the immunomodulator AS101 during chemotherapy can successfully prevent damage to fertility.

The study was conducted by doctoral student Lital Kalich- Philosoph and Dr. Hadassa Roness at the Center for Fertility Preservation at the Sheba Medical Center at Tel Hashomer. The center is headed by Prof. Dror Meirow, in collaboration with Bar-Ilan University’s Cancer AIDS and Immunology Research Institute, headed by Prof. Benjamin Sredni.

Alkylating agents such as cyclophosphamide (Cy) carry a high risk of ovarian toxicity and are among the worst offenders with regard to the risk of future infertility, the Sheba researchers wrote.

For years, medical research and treatment have been working to find ways to preserve fertility in female cancer patients.

Methods such as freezing of eggs or embryos followed by IVF treatments, or freezing of ovarian tissue for transplantation after recovery, are routinely practiced but are not suitable for all patients. In addition, they are invasive and expensive and carry no guarantee of success.

It was clear that a far better method of preserving fertility in cancer patients would be to prevent the damage and loss of eggs that occurs during chemotherapy.

The Sheba team used a mouse model of Cy treatment to demonstrate that this chemotherapy drug attacks the ovaries by a twofold mechanism.

It is toxic to dividing cells and kills actively growing ovarian follicles. At the same time, it also activates the dormant follicles, inducing them to grow and proliferate, which makes them susceptible to the effects of the drug as well.

In this way, Cy treatment depletes reserves of eggs on the ovaries, leading to early ovarian failure and infertility.

“The dormant oocytes are a woman’s fertility reserve,” explained Meirow. “Until now the loss of these oocytes was believed to be the direct result of the toxic effects of the chemotherapy, and research focused on ways to prevent the direct death of these cells.

However, what we found is that the oocytes are not killed by the chemotherapy. Rather, it triggers a wave of growth in these dormant cells. Once they begin the process of growth and maturation, they ultimately die off, thus causing burnout of the ovarian reserve.

“This new understanding of the mechanism behind the loss of these cells has allowed us to shift the focus and find a new drug that can prevent the growth of the oocytes.”

The researchers tested the use of an experimental drug called AS101, which was found to block the activation and growth of the dormant oocytes. Mice treated with AS101 in conjunction with Cy fared much better than their counterparts receiving chemotherapy alone. Their primordial ovarian follicles remained dormant, did not start proliferating prematurely, and survived through the entire treatment. Subsequently, the mice that received AS101 along with Cy had normal fertility, whereas the ones treated with Cy alone had a lower rate of pregnancy and fewer total offspring.

“AS101 was developed at BIU,” said Sredni. “It is currently in advanced clinical trials for use in cancer patients, and previous studies have shown it doesn’t affect the efficacy of the chemotherapy treatment. It may even increase the effectiveness of treatment.”

Future experiments will be needed to translate this work from mice into human patients and confirm the effectiveness of AS101 for preserving fertility in the clinical setting. The discovery regarding the mechanism behind Cy-induced loss of ovarian reserve is an important breakthrough that will pave the way for additional research into new methods for preserving fertility in cancer patients.

The entire study was carried out here by Israeli researchers and supported by grants from the Kahn Foundation, the Israel Cancer Association, the Health Ministry, the Dave and Florence Muskovitz Chair in Cancer Research and the Jaime Lusinchi Research Institute in Applied Sciences. The research team was awarded a number of prestigious prizes for their work.