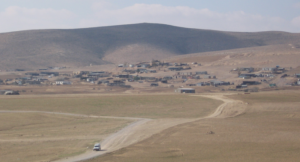 The State Prosecutor’s Office filed an indictment Monday against a resident of the Bedouin diaspora for polygamy, the first to be served by the Southern District Attorney’s Office since the state announced it would begin to enforce anti-polygamy laws prohibiting marrying more than one woman, after the new guidelines went into effect in January 2017.

The maximum sentence for the offense is five years in prison.

Since the beginning of the year, 179 police inquiries have been opened to investigated cases of polygamy.

Monday’s indictment was submitted to the Be’er Sheva Magistrate’s Court against a 36-year-old resident of the Bedouin community after he married a second wife aged 24. The marriage was arranged after the second wife’s father, who wanted to marry her off, did so without informing his daughter that she was going to be a second wife.

In 2015, Justice Minister Ayelet Shaked and then-Attorney General Yehuda Weinstein led a change in the handling of polygamy cases, which is prevalent mainly in the Bedouin sector, through enforcing sanctions.

Weinstein decided on the change in enforcement after discussing the matter and a series of steps with the state prosecutor and the top echelon of the State Prosecutor’s Office.

Alarms were sounded in the legal establishment in light of worrying statistics which showed that as of 2015, 36 percent of men in the Bedouin sector have been simultaneously married to more than one woman.

Anti-polygamy laws have rarely been enforced in isolated incidents, and in recent years there has been no enforcement at all.

In total, the police are currently investigating 15 cases under the new directive.

Professionals point out that in families where there is multiple marriages, children tend to suffer more from emotional deprivation, leading to violence in the family between siblings and the wives. Such conflict is also known to lead to economic and emotional distress.

“This is a phenomenon that must be uprooted, and which inevitably leads to economic harm to those involved,” said a police representative, adding that polygamy harms both state institutions and the women who find themselves in such marriages.