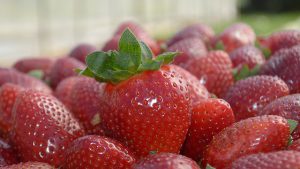 Israel’s Volcani Agricultural Institute, along with Uri Ariel, the Minister of Agriculture, honored the memory of Israel Borderguard policewoman Hadar Cohen (ז”ל), by naming a new strain of strawberry in her name.

The Volcani Agricultural Research Organization has decided to name a newly developed strawberry strain after Border Police Cpl. Hadar Cohen, who was killed in a terror attack at the Damascus Gate in Jerusalem last February.”Hadar’s favorite fruit was strawberries,” said Hadar’s mother, Sigal.

“The institute’s decision to register a variety of strawberries in her name has greatly moved the whole family, and the commemoration of Hadar in this manner has exceeded all our expectations. The shape of the fruit reminds us of the shape of a heart, and it reminds us of Hadar’s tremendous heart.”

The strawberry, named “Hadar,” is noted for its quality taste, symmetrical shape and bright red color. It was developed by Dr. Nir Dai, a researcher at the institute.

The idea of naming the new strain after Hadar was raised after Minister of Agriculture Uri Ariel visited the Cohen family to offer his condolences.

“The Institute’s developments are gaining worldwide recognition, but it is important to us that they have added value for the residents of the country and to those who have made the greatest sacrifice. This is a special and unusual form of commemoration, which will remind us all of Hadar and the rest of the fallen during routine moments, such as eating fruit,” said Dr. Dai.

Prior to Memorial Day, the Cohen family was invited to Volcani, where they sampled the new strawberry together with Agriculture Minister Uri Ariel and Dr. Dai.

“We were excited to embrace the family and give them this gift, that’s our little part in preserving Hadar’s memory,” said Dr. Dai.

Minister Ariel added, “Hadar is a heroine of Israel, who did not hesitate to risk her life in order to save citizens of the State of Israel. The new strawberries will add a bit of sweetness to the world; the same sweetness that Hadar spread to her surroundings, and will add a drop of comfort in the bereavement and loss.”