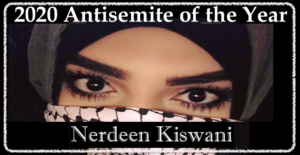 Nerdeen Kiswani is a law student at City University of New York’s (CUNY) Hunter College. On Tuesday, Stopantisemitism.org, a nonprofit that tracks antisemitic activity, announced her as “antisemite of the year.”

Kiswani previously co-founded and served as president of the Students for Justice in Palestine (SJP) chapter, a pro-Palestinian activist group largely active on college campuses.

“Antisemitism is a serious problem that requires serious consequences for those who promote it,” said Liora Rez, Stopantisemitism.org’s executive director. “Too many antisemites like Kiswani are spreading their radical hate through mainstream sectors, from education to law, by disguising it as criticisms of Israel.” Stopantisemitism.org was founded following the 2019 Tree of Life synagogue shooting, answering the call to track the recent rise in antisemitic rhetoric and acts.

Kiswani has a storied history of terrorist glorification. In February 2018, she tweeted, “I was boutta kill a couple settler colonies But they did it to themselves.”

She also posted and then deleted photos of her on Instagram with terrorists, twice. The first was in June 2019, of her with Rasmieh Odeh, who was deported and stripped of US citizenship at the age of 70 for her involvement in two terrorist bombings. 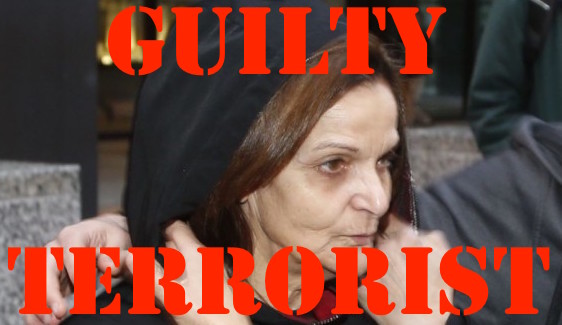 The second instance was in December 2016, when Kiswani posted photos of herself in her room, with pictures of Leila Khaled, a convicted Popular Front for the Liberation of Palestine (PLFP) terrorist, visible on the wall.

In 1969, Khaled hijacked a flight from Rome to Tel Aviv, forcing it to divert to Damascus. She attempted to hijack another aircraft in September 1970. 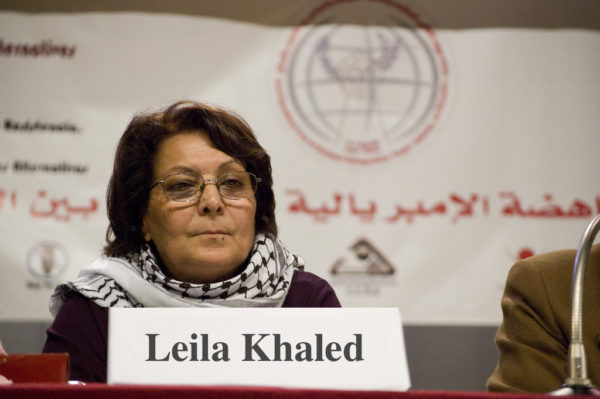 Kiswani is apparently too radical even for SJP. Back in 2015, SJP rejected the chapter under her leadership as too radical, specifically in response to an article the chapter wrote titled “The BDS Ceiling.”

In the article, the movement accused the Boycott, Divestment and Sanctions movement as being “as a tool in a toolbox, not the toolbox itself.”

Kiswani went on to establish a different Palestinian-rights organization called “Within Our Life,” Algemeiner reported at the time. The group expanded beyond campus activism.

Most recently, she threatened to set the shirt of a black man on fire with a lighter. The shirt had the IDF logo on it.

After the video went viral, stopantisemitism.org demanded CUNY investigate. CUNY first said that Kiswani was “exercising her First Amendment right,” and then denounced it. They then condemned antisemitism as well.

A few months earlier, SJP was among the main signatories of a petition that circulated around CUNY Law titled, ‘CUNY Law Student groups, Students, Alumni and Faculty stand with SJP and Palestinian students.’ The petition was written following the publication of an op-ed by Rafaella Gunz, a self-described liberal, who recorded the harassment she incurred when she decided to publicly support Israel.

The voting period for “antisemite of the year” is open for five weeks before the winner is announced. Over that time, Kiswani won the title over two other contenders: Simone Zimmerman and Ice Cube.

“Each contender chose to propagate Jew-hatred in an already painful year, struck by the coronavirus pandemic, economic turmoil and political divide — events that have exacerbated the rise in antisemitism,” said the website.

Rep. Ilhan Omar was named antisemite of 2019 last December. In a video listing her antisemitic acts, stopantisemitism.org noted her accusation of Israel as “hypnotizing” the world, her accusation of American Jews as possessing “dual loyalty” and her support of BDS.