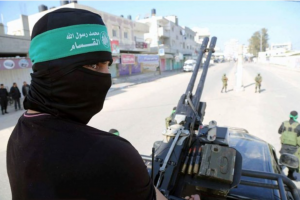 A Soviet-made anti-aircraft gun, most likely taken out of Libya, was seen in Gaza last week at a Hamas military parade.

The weapon is believed to have been smuggled into the Gaza Strip via the Sinai Peninsula by ISIS cells operating in the area. If confirmed, this would validate suspicions of expanding cooperating between Hamas and ISIS cells in the Sinai.

Despite an ongoing blockade on Gaza imposed in 2007 following the Hamas takeover of the Strip, Hamas has managed to smuggle in an arsenal of weapons through a massive tunnel network stretching from the border city of Rafah in Gaza into the Sinai.