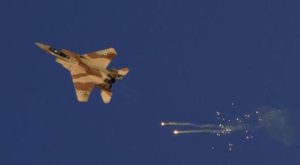 The operation, which was carried out by eight Israeli jets, struck 12 targets in Syria including thee Syrians SA5 and SA17 air defense batteries and four Iranian targets near the town of Kiswah, which is home to Syria’s 1st armored division and part of the Islamic Republic’s buildup in Syria.

The Israeli attack was met with anti-aircraft fire, triggering air raid sirens in the Golan Heights and upper Galilee, warning residents of potential rocket strikes. Below is a map of the locations where air raid sirens were triggered.

“Iran and Syria are playing with fire,” he said.“The IDF acts with determination against the attempt of the Iranian-Syrian attack and the violation of Israeli sovereignty. The IDF is prepared for a variety of scenarios and will continue to act as necessary.”

Early on Saturday morning an Iranian drone, which was launched from a Syrian base in the Homs desert, was identified approaching Israeli airspace by the IDF around 4am, setting off alarms across Golan Heights and the Jordan Valley.  Once entering Israel it was intercepted by an Israeli Air Force Apache helicopter near the town of Beit She’an.

“The IDF will continue to operate against attempts to infiltrate Israeli airspace and will act with determination to prevent any violations of Israel’s sovereignty,” read a statement by the IDF’s Spokesperson’s Unit.

“Iran is dragging the region into an adventure and will pay the price for it.”

In response, Israeli aircraft targeted the drone’s launch site deep inside Syrian territory in a “complicated surgical strike,” in which heavy anti-aircraft missile fire was launched by the Syrians against the Israeli jets.

“During the Air Force operation, anti-aircraft missiles were fired at the aircraft and the pilots of one of the planes ejected themselves. The pilots fell inside Israel and were evacuated to hospital,” the army said.

The army later cleared for release that one of the pilots was severely wounded while the other one was slightly injured.

The IDF could not confirm whether the jet, which crashed in Beit Netofa Valley in the Lower Galilee, was hit by the anti-aircraft missiles or if it crashed for other reasons.

An unidentified Syrian military source was cited as saying that the Syrians hit more than one Israeli plane. However, the IDF denied this report and confirmed that only one aircraft was damaged.

It was the first time that Israel lost an aircraft in a combat situation since 2006 when an Israeli Yasour (Sikorsky CH-53) helicopter was shot down over Lebanon, killing the entire crew including the first female flight mechanic in Israel’s heavy transport helicopter fleet.

Prime Minister Benjamin Netanyahu and members of the security cabinet were briefed on the situation, but so far no special meetings have been scheduled.

Defense Minister Avigdor Liberman also met with IDF Chief of Staff Lt.-Gen. Gadi Eisenkot and other senior members of the defense establishment to discuss the security situation in the north.

Tensions on Israel’s northern border have been rising in recent months as Israel fears that Iran is entrenching itself deeper into war-torn Syria with its presence on Israel’s borders growing in strength.  The smuggling of sophisticated weaponry and the building a precision missile factory in Lebanon for Hezbollah has also been a growing concern for Jerusalem.

On Thursday regime forces fired at an IDF drone with shrapnel hitting a home in the Druse village of Majdal Shams in the Golan Heights.

Earlier in the week Israel was reported to have struck an Iranian base west of the capital of Damascus.  Syria’s official news agency SANA said Israeli fighter jets flying in Lebanese airspace fired a number of missiles towards the area of Jamraya research center targeting an Iranian base. While a number of missiles did hit their intended targets, several others were intercepted by the Syrian air defenses, the report said.

Israel rarely comments on foreign reports of military activity in Syria but has publicly admitted to having struck over 100 Hezbollah convoys and other targets in Syria, with Netanyahu saying that strikes will continue when “we have information and operational feasibility.”

Israel’s Security Cabinet went to the Mt. Avital outlook on the Golan Heights on Tuesday and received a briefing from Chief of Staff Lt.-Gen. Gadi Eizenkot, OC Northern Command Maj.-Gen. Yoel Strick and other senior officers.

Following the briefings, Netanyahu said that while Israel wants peace, it is “prepared for any scenario, and I suggest that no one test us.”