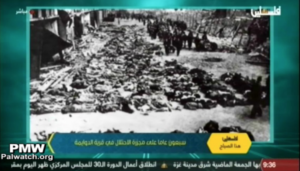 The official PA TV news presented a photograph of hundreds of bodies of Jews which was taken at the Nordhausen concentration camp in Thuringia, Germany, as a picture of Arabs massacred at Deir Yassin in 1948. The picture was taken soon after American forces liberated the camp in 1945.

Ironically, this is not the first time PA TV have deceived their viewers about this concentration camp photo. Palestinian Media Watch exposed earlier this year that PA TV presented this very same photo claiming it showed Arabs killed by Jews on April 9, 1948 in the village of Deir Yassin.

The channel also presented a picture of bodies wearing the striped uniforms of concentration camp prisoners as being from Deir Yassin. According to PMW, the picture was likely taken at the Leitmeritz concentration camp in Germany, now part of The Czech Republic.

In addition, two pictures of the 1982 Sabra and Shatila massacre, which was committed by Christian Phalangists in Lebanon, as being from Deir Yassin.

I can’t help but repeat this decades’ old question:

If the ‘Palestinian Cause’ was just and true,
Why their need to constantly lie and deceive?

so, really…. Why their Nazi-like propaganda antics?
Why their need to engage in ‘Pallywood‘ subterfuge?

Because EVERYTHING about them, and their cause, is a lie.
All one needs to do is examine, investigate anything they claim.