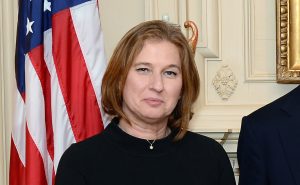 According to Le Temps newspaper, Livni was named in a suit filed by the Geneva-based “Urgence Palestine” activist group. The group accused Livni of “war crimes” for her part in Israel’s Operation Cast Lead from December 2008-January 2009. Livni was Israel’s Foreign Minister at the time.

The Swiss Attorney General’s Office confirmed to the website swissinfo.ch that the “[legal] request is presently being studied.”

Livni had been in Switzerland on May 28 in the city of Lugano in the southern part of the country for an event organized by the Swiss-Israel Association celebrating the 69th anniversary of the establishment of the state of Israel.

This is not the first time Livni has been accused of war crimes by European countries. In January 2017, Livni was forced to cancel an event with Jewish leaders in Belgium after it became clear that Belgian prosecutors intended to question her upon her arrival over alleged “war crimes” during the Operation.

In 2009, a British court issued an arrest warrant for Livni after Palestinian Arab activists made an application over her role as Foreign Minister during the conflict. In December of that year, she cancelled a visit to London after being informed of the arrest warrant.

Last year, Livni was handed an invitation to report to police for questioning over “war crimes” when she landed in London.

The invitation for questioning was received as Livni visited London in a personal capacity to participate in a local conference.

The Foreign Ministry condemned that request from British police at the time, saying it viewed the request “with great concern”.

“We would have expected different behavior from a close ally such as the UK,” it added.