The Swiss Federal Dept of Foreign Affairs clarified that it has already transferred $22.5 million to UNRWA for 2019, so the suspension of financial support would be for 2020, as it attaches special importance to good governance for international organizations.

Switzerland suspended payments to the United Nations Relief and Works Agency for Palestinian Refugees (UNRWA) until completion of a UN investigation into ethical misconduct among senior officials in the organization, the Swiss Federal Department of Foreign Affairs said on Tuesday.

The Swiss clarified that it has already provided UNRWA with its pledged $22.5 million for 2019 and that the suspension would only impact money slated for 2020. Continue Reading »

Defense Minister Avigdor Liberman subsequently issued the ban having been informed by IDF Maj-Gen Yoav Mordechai of a set of meetings that occurred between Swiss representatives and the Gaza-based terrorist group leaders, Ismail Haniyeh & Yahya Sinwar.

Swiss officials have been reportedly banned from entering the Gaza Strip by Israel from via territory, following a set of meetings that apparently occurred between representatives from the country and Gaza-based Hamas group leaders, The Times of Israel reported on Wednesday.

The matter was brought to the attention of Defense Minister Avigdor Liberman who subsequently issued the ban having been informed by Israel Defence Forces’ Coordinator of Government Activities in the Territories (COGAT) Yoav Mordechai, reported Hadashot on Tuesday. Continue Reading » 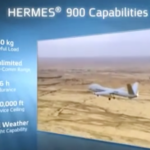 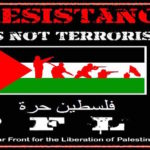 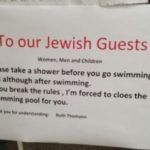 Many haredi tourists visit European resorts at this time of year, when yeshiva students are on summer vacation. Continue Reading » 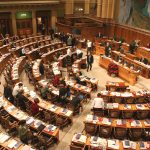 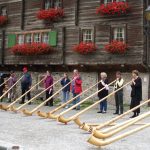 According to a Basler Zeitung report, Switzerland finances NGOs in the Palestinian territories and in Israel, that calls for the murder of Jews and works for the destruction of Israel.

A February article in the Swiss daily Basler Zeitung reported that some of the nearly $60 million its government has sent in support of Middle East projects also funds initiatives that call for the destruction of Israel and the murder of Jews.

“Switzerland finances in different ways organizations in Israel and the Palestinian territories that call for the annihilation of Israel and for the death of Jews,” wrote Dominik Feusi, senior editor of Basler Zeitung. Continue Reading » 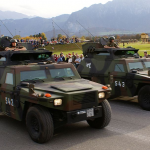 Swiss government refuses to follow neighbouring countries where Jews or Jewish institution may be targeted in violent attacks, saying, ‘There is no constitutional basis permitting the federal state in funding the costs.’

Switzerland’s Jews need to fund their own security costs, a Swiss government agency said in a report on anti-Semitism.

The unusual assertion came in a report published last week by the Swiss interior ministry’s Service for the Fight against Racism. It prompted a mixed reaction by the country’s Jewish communities, who welcomed the report’s naming of the problem but criticized its failure to offer alternative solutions. Continue Reading » 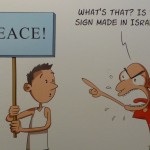 The Swiss parliament’s inquiry into anti-Israel NGOs could bring about devastating changes for scores of pro-Palestinian NGOs operating in Israel & in the disputed territories.

Berlin – The Swiss Federal Department of Foreign Affairs (FDFA) has allocated funds in the millions to anti-Israel NGOs linked to terrorism and working in support of the Boycott, Divestment and Sanctions movement against Israel, according to a report that appeared in Switzerland’s Basler Zeitung on Monday. 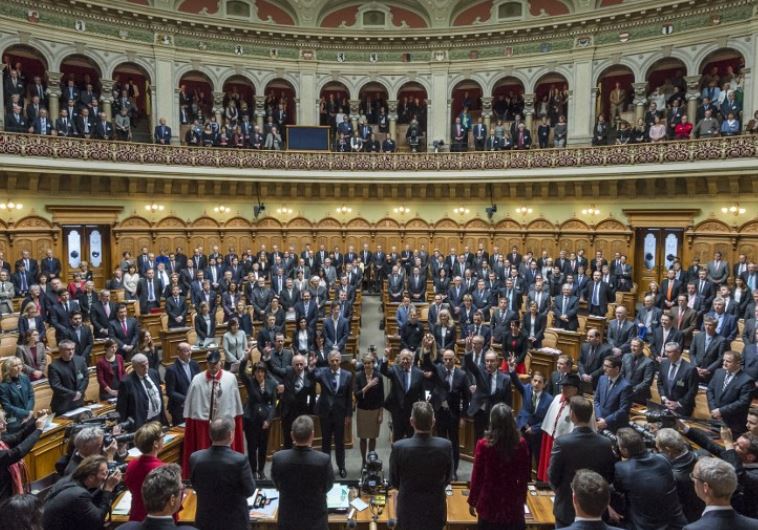 The front-page story by veteran journalist Dominik Feusi, headlined “Resistance in Parliament against money for Israel-critical campaigns,” stated that MP Christian Imark had introduced a motion supported by 41 lawmakers from across the political spectrum calling on the FDFA to stop all direct or indirect funding to organizations that sponsor “racist and anti-Semitic actions” or are involved in BDS campaigns. Continue Reading »

Switzerland to probe whether a pact between a former Swiss gov’t minister & the PLO interfered with an investigation into a terrorist attack that killed 47 people on a Swissair plane in 1970.

Switzerland is looking into whether a former government minister struck a secret deal offering diplomatic assistance to the Palestine Liberation Organization in 1970 in exchange for the Arab group stopping attacks on Swiss targets. 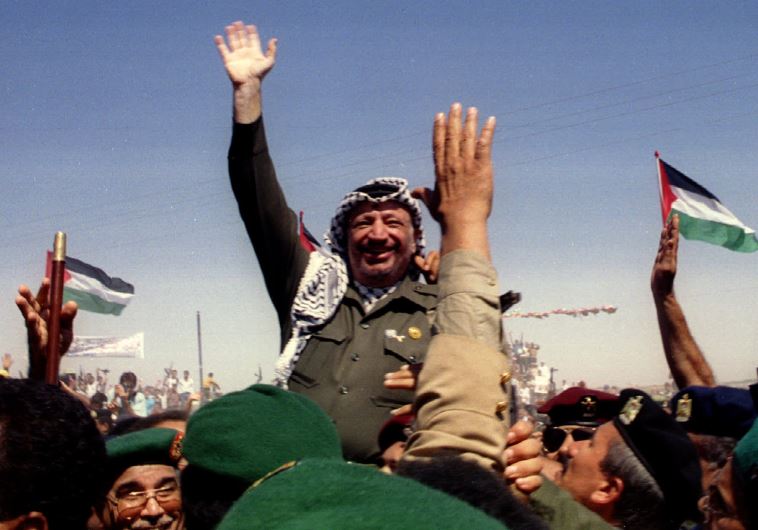 Palestine Liberation Organization chairman Yasser Arafat waves as he is briefly lifted on the shoulders of Palestinian police moments after entering the Gaza Strip in 1994. – Photo: REUTERS

The allegation emerged this year in a book, Swiss Terror Years, which has also raised questions whether a pact between the PLO and Switzerland interfered with an investigation into a bomb attack on a Swissair plane in 1970 that killed 47 people. Continue Reading » 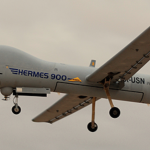 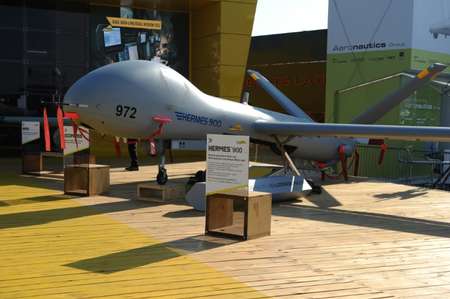 “Disinformation & the political ideology of hatred are being directed against the Jewish state…(by) one-sided, unbalanced non-scientific reports.”  The 10 Swiss parliamentarians said the NGO belongs to the BDS movement and its work is “propaganda.”

The opening of the Breaking the Silence exhibit in Zurich on Thursday unleashed a firestorm of criticism from Swiss politicians who say the country’s Foreign Ministry misused public funds to finance a hate-filled exhibit targeting the Jewish state. 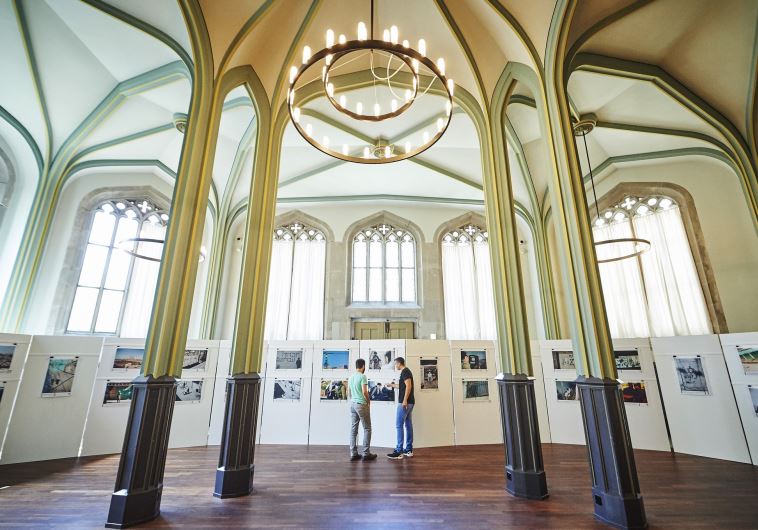 The Breaking the Silence exhibit at the Kulturhaus Helferei in Zurich, Switzerland. – Photo: AFP/MICHAEL BUHOLZER

“We condemn sharply the sponsorship of Breaking the Silence, with public monies through the EDA [Swiss Foreign Ministry] and the Zurich Finance Department, and expect in future a careful examination of projects and those organizations standing behind such projects before Swiss taxpayer money is misused,” 10 Swiss MPs from the parliamentary Swiss-Israel parliamentary group said in a statement dated Tuesday. Continue Reading »

Even as the EU continues to sanction Hamas, the influx of Swiss financial support now bolsters the terrorist regime that was on its last legs.

Switzerland has put together a generous financial package to prop up the Hamas-ruled Gaza Strip after billions in promised foreign donations following last summer’s Gaza war failed to materialize.

That according to Palestinian officials who spoke to Israel’s NRG news portal, which reported that as part of the deal, the Swiss government would pay the salaries of thousands of Hamas members – many of whom are known terrorists – thereby propping up Hamas rule.