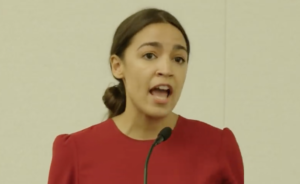 When pressed on what she meant she struggled to give an answer and then admitted she does not know what she is talking about. pic.twitter.com/e3Uq1eupD3

During the extensive interview, Ocasio-Cortez discussed her stances on a variety of issues, including education reform, the future of democratic socialism, immigration reform, and the Israeli-Palestinian conflict.

Toward the end of the interview, host Margaret Hoover turned to the politician’s foreign policy positions, referring to a controversial tweet she made during her campaign bid, and asking her what her position on Israel is.

Ocasio-Cortez began by stating that she “believes absolutely in Israel’s right to exist” and that she is a proponent of the two-state solution.

When pressed further, she elaborated: “I also think that what people are starting to see, at least in the occupation of Palestine, is just an increasing crisis of humanitarian condition. And that, to me, is just where I tend to come from on this issue.”

Hoover then asked: “You use the term ‘the occupation of Palestine’. What do you mean by that?”

In response, Ocasio-Cortez exclaimed “Oh!”, paused, and said “I think that what I meant is the settlements that are increasing in some of these areas, in places where Palestinians are experiencing difficulty in access to their housing and homes.”

The interviewer continued to press her for clarification, at which point Ocasio-Cortez somewhat deflected the request, stating that she is “not the expert on geopolitics on this issue.”

“For me, I’m a firm believer in finding a two-state solution in this issue, and I’m happy to sit down with leaders on both of these. For me, I just look at things through a human rights lens.”

She concluded by saying that with her background, Middle Eastern politics were not exactly at her kitchen table every night, but that she does recognize it is “a very important issue” and she is willing to listen, learn, and evolve on the issue.

This is a massacre.

I hope my peers have the moral courage to call it such.

No state or entity is absolved of mass shootings of protesters. There is no justification. Palestinian people deserve basic human dignity, as anyone else.

Democrats can’t be silent about this anymore. https://t.co/wJGATOtDsR

Ocasio-Cortez has previously vocalized her support for the Palestinian cause via social media. In a tweet she wrote during her campaign, which Hoover referenced, the candidate characterized the killing of over 60 Palestinians in Gaza border clashes with Israeli forces as a massacre, and demanded congressional attention.

Ocasio-Cortez, 28, is a former organizer for Senator Bernie Sanders’s presidential campaign. If elected, she would be the youngest woman ever to serve in congress.

A personal message to this antisemite who continues to propagate lies in her political comments:

Alexandria Ocasio-Cortez @Ocasio2018 needs to STFU & stop propagating Hamas propaganda until she learns the facts.
This ignoramus is feeding antiSemitism by lying to an even more imbecilic constituency who believe her propaganda as facts.
Kudos @MargaretHoover for speaking up‼️ https://t.co/Nb7Zuq7j1F