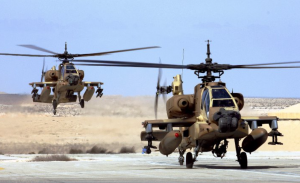 In the middle of the 2014 Gaza War, the Obama administration stopped deliveries of Hellfire missiles to the Israeli Air Force’s Apache helicopters, in an attempt to pressure the Israelis to stop their operation in Gaza.

And so, as part of the lessons of that war, the Israeli Air Force and Rafael Advanced Defense Systems adapted their fire-and-forget anti-tank guided missile Spike to be launched from Israeli Apache helicopters, to prevent dependence on American goodwill in future wars.

Now the Americans want to use the same Israeli missile on their own Apache helicopters. The US Army is anxious to improve their choppers’ ability to shoot at relatively distant targets, with the aim of reducing the risk to said choppers. Turns out the Israeli missile has the range that the American missiles currently lack.

Spike is an Israeli fire-and-forget anti-tank guided missile and anti-personnel missile with a tandem-charge HEAT warhead, currently in its fourth-generation. It was developed and designed by the Israeli company Rafael Advanced Defense Systems and is available in man-portable, vehicle-launched, and helicopter-launched variants.

In addition to engaging and destroying targets within the line-of-sight of the launcher (“fire-and-forget”), some variants of the missile are capable of making a top attack profile through a “fire, observe and update” guidance method (essentially lock-on after launch). The operator tracks the target, or switches to another target, optically, through the trailing fiber-optic wire (or RF link) while the missile is climbing to altitude after launch.

An early version of the Spike was offered by Rafael as a possible contender for the US Army JAWS missile program in 1996. It was not picked up.