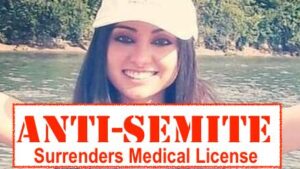 Former medical resident Lara Kollab has agreed to surrender her medical certificate, and will not be able to practice osteopathic medicine in the state of Ohio, nor attend any other medical training program in the state following scores of anti-Semitic tweets. 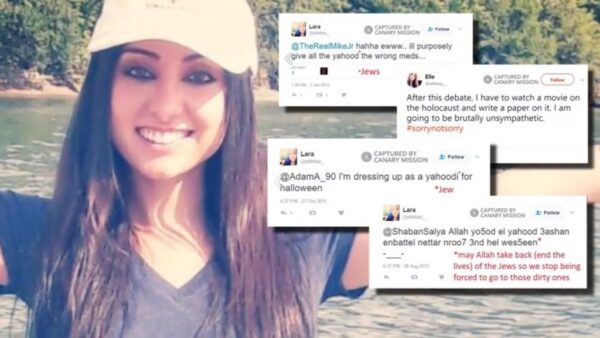 Kollab was found to have written dozens of anti-Semitic tweets from August 2011 through September 2013, but deleted them all after she was accepted by the Touro College of Osteopathic Medicine in New York, which prides itself as “the largest private university in the U.S. with Jewish roots.”

Kollab was found to have tweeted dozens of anti-Semitic messages calling for violence against Jews, threatening to harm Jews as part of her medical training, supporting Hamas, and trivializing the Holocaust.

“People who support Israel should have their immune cells killed so they can see how it feels to not be able to defend yourself from foreign invaders,” wrote Kollab on a handwritten note in one of her tweets.

“hahha ewww.. ill purposely give all the yahood [Jews] the wrong meds…” she wrote in another.

Kollab attempted to defend her conduct in an apology written after the content of the tweets came to light.

She claimed she had written them because she had “difficulty constructively expressing my intense feelings about what I witnessed in my ancestral land,” following visits to Israel and the West Bank.