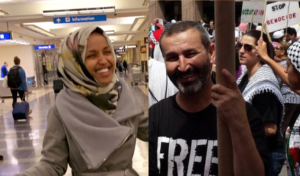 U.S. Representative Ilhan Omar (D-MN) will be speaking alongside a well-known Islamic Relief USA official, Yousef Abdallah, who has publicly advocated for violence against Jews and has posted antisemitic comments on social media.

Congresswoman Ilhan Omar will be a keynote speaker at an Islamic Relief USA emergency fundraising dinner for Yemen on February 23.

Omar will be speaking at the Florida event alongside a well-known Islamic Relief USA official, Yousef Abdallah, who has openly advocated for violence against Jews and has shared antisemitic sentiments on his social media pages.

The Middle East Forum’s Islamist Watch blog highlighted this address and reported several instances in which Abdallah posted or shared stories of incitement. This includes his captioning and sharing a “very beautiful [folk] story” about “martyrs” who provide guns to “kill more than 20 Jews” and “fire rockets at Tel Aviv.”

In addition, the forum also found that he had referred to Jews as “stinking,” and had claimed that “the Jews set the outside wall of Al Aqsa [the mosque in Jerusalem] on fire.”

Abdallah also liked a comment on one of his Facebook posts that called on God to wreak “revenge on the damned rapists Zionists…. Shake the Earth beneath their feet and destroy them as you destroyed the peoples of ʿĀd, Thamud and Lot.”

Islamic Relief has been found to have connections to funding terrorism and Islamic extremism. A Swedish government report named it as a front for the Muslim Brotherhood; the Tunisian government is reported to have investigated allegations that Islamic Relief was funding jihadists on the Libyan border; and members of the US Congress have launched an inquiry into a reported FBI and IRS investigation of Islamic Relief’s activities.

The announcement of Omar’s speaking engagement comes just days after the congresswoman, a famed Boycott, Divestment and Sanctions (BDS) supporter, pointed an accusatory finger at the American Israel Public Affairs Committee (AIPAC), saying the organization is paying American politicians to be pro-Israel.

Omar’s commented erupted a Twitter hurricane with leaders on the right and left condemning her remarks. Even her own Democratic Party issued a statement in which it called Omar’s statements “deeply offensive. We condemn these remarks.

House Speaker Nancy Pelosi reported on Twitter that she and Omar had spoke and “agreed that we must use this moment to move forward as we reject antisemitism in all forms.”

On Monday, the Union for Reform Judaism’s President Rabbi Rick Jacobs condemned the tweet, saying that “in the strongest terms Rep. @IlhanMN’s tweets trafficking in stereotypes about Jews, money, and political power.

“These tropes have for generations been at the core of acts of hate directed at the Jewish community,” he continued. “To see such sentiments expressed by a member of Congress is shameful, and they cannot be allowed to go unanswered. I welcome the statements from congressional leaders and others who have condemned her tweets.”

He added that “moving forward, I urge Rep. @IlhanMN to engage with members of the Minnesota Jewish community, as well as with national Jewish leaders, to explore the pain her words have caused and the impact of perpetuating anti-Semitic themes.”

Also commenting on the matter, left-wing Jewish organization JStreet said in a statement that “elected officials should be particularly sensitive and careful on the question of the role played by campaign contributions in influencing US policies toward Israel and the Middle East.

“There is no doubt that money often plays a major role in our political system,” the organization said. “At the same time, elected officials must be extremely aware that tropes about Jewish money and political influence have been used for centuries to target and stigmatize our community.”

The Israeli media watchdog, HonestReporting, invited Omar to join a mission to “see the real Israel.”

In an open Twitter letter, HonestReporting asked Omar to “visit our country for yourself.”

“It’s unfortunately no surprise to see young people, elected representatives included, make false allegations and misleadingly depict Israel and its connections to American and world Jewry, when they themselves have been exposed to biased narratives in the media,” said HonestReporting’s Executive Director Daniel Pomerantz. “The best way to counteract this is by inviting people to visit the country and see it for themselves.”

The HonestReporting mission will run May 27 through June 3. Participants will tour Israel and meet with Jewish and Arab leaders.

Even President Donald Trump got into the discussion. En route to El Paso for his “Make America Great Again” rally on Monday night, the president slammed Omar: She should “be ashamed of herself,” Trump said, in a statement published by USA Today. “I think it was a terrible statement.”

Omar apologized for her tweet soon after posting it.

“Antisemitism is real, and I am grateful for Jewish allies and colleagues who are educating me on the painful history of antisemitic tropes,” Omar posted on the social media site. “My intention is never to offend my constituents or Jewish Americans as a whole.”

She then said she stood behind her comment regarding the “problematic role of lobbyists in our politics, whether it be AIPAC, NRA or the fossil fuel industry.”

On Tuesday, the US president called on Omar to resign. “[She] should either resign from Congress or she should certainly resign from the House Foreign Affairs Committee.”