When Stewart asked Carter what he believed led to the massacre, which claimed the lives of 17 people, the latter replied: “Well, one of the origins for it is the Palestinian problem. And this aggravates people who are affiliated in any way with the Arab people who live in the West Bank and Gaza, what they are doing now [and] what’s being done to them. So I think that’s part of it.”

Carter, a Georgia Democrat who served as president from 1977 to 1981 and who in 2002 was awarded the Nobel Peace Prize, said the world is in the midst of a “new evolutionary development in terrorism.”

“I think this is a new evolutionary development in terrorism, where people go into Syria, they get trained there, they have a passport from France, from Great Britain or from the United States,” he said. “They stay there for a few months and learn how to be a terrorist and then they come back through Turkey and you know they have been there and you know who they are. And I think this event in Paris is going to waken up the people in charge of security to watch those people more closely than they have in the past – and not single out all of the Muslims in the country.”

Carter has repeatedly slammed US administrations for failing to advance the Israeli-Palestinian peace process and has advocated direct negotiations with the Islamist group Hamas. 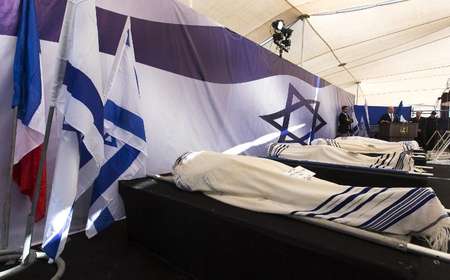 “Israeli Prime Minister Benjamin Netanyahu (R) speaks near the bodies of the four Jews killed in an Islamist attack on a kosher supermarket in Paris last week, placed in front of an Israeli national flag at a cemetery in Jerusalem on January 13, 2015” – Photo: Jim Hollander /Pool/AFP

Willcox on Monday tweeted: “Really sorry for any offense cause by a poorly phrased question in a live interview in Paris yesterday – it was entirely unintentional.”

The BBC News reporter was covering the unity march on Sunday being held in solidarity with the victims of a wave of Paris terror attacks when he replied to a woman’s comments about the dire state of French Jewry by saying: “Many critics of Israel’s policy would suggest that the Palestinians suffer hugely at Jewish hands as well.”

According to the Telegraph, the woman who made the comment was the daughter of Holocaust survivors.

“We have to not be afraid to say that the Jews are the target now,” the woman had said.

“You understand everything is seen from different perspectives,” Willcox answered, the Post reported.