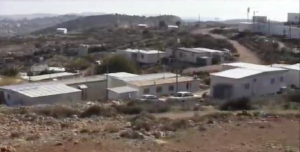 With no death penalty sentences laid down for convicted terrorists, and Palestinian leadership’s glorification & rewards to murderers that only incentivizes more attacks, it may be time to implement & accelerate a proper Zionist response, something the Palestinian leadership will find more difficult to digest.

Maybe our leaders will implement harsh measures and we can now come to our senses by launching a broader, more creative offensive initiative; and maybe we will continue restraining and fortifying ourselves to death with more walls and fences; but what about providing a proper Zionist response? What happened to that most basic and healthy Jewish instinct, characteristic of our return to Zion? Living and building as a response to death and grieving; planting a tree for every one that is uprooted, settling and community building for every victim – a living monument to the fallen.

Kibbutz Netiv HaLamed Heh was renamed after the 35 Haganah soldiers killed in a convoy to resupply the Gush Etzion kibbutzim during Israel’s War for Independence. (Lamed-Heh is 35 in Hebrew numerals).- Photo: Davidbena/Wikimedia

This is the true vengeance we can exact from our murderers and it is tried and true, whether they try killing us or not. The land of Israel is not obtained solely through blood and fire. Security is a means. Life in Zion is the end.

Renewing and expanding this life will make it clear – firstly to ourselves and then to our enemy as well – that Jews still remember this is our ancestral homeland. That against Arab “sumud” (steadfastness) there is also Jewish sumud in the land of Israel.

This has to happen in places where construction is frozen, in Jerusalem and its environs; and in the fledgling and veteran settlement communities that haven’t been legalized yet. It has to happen in Givat Asaf – where IDF soldiers were murdered on Thursday – established in 2001 in memory of Asaf Hershkowitz, who was also murdered in a shooting attack near Ofra just three months after his father, Aryeh Hershkowitz, was similarly murdered. A founding father of Givat Asaf, Gideon Lichterman, was also murdered in a shooting attack near Shilo Junction.

Ofra and Givat Asaf must now become flagships, to be followed by many more outposts and settlements. This used to be our natural response.

In response to the murderers who cut life short, the farmers and the builders resurrected and expanded. The land is dotted with these living monuments, such as Netiv Halamed-Heh and Maaleh Hahamisha and Givat Salit, which commemorate the fallen and victims of terror. The keys are now in the hands of Prime Minister Benjamin Netanyahu. He needs to unleash the IDF but also the settlement enterprise. If not now, when?