“Our message to the foolish Benjamin Netanyahu and all leaders in the Zionist entities, we will continue to electronically attack until the people of Palestine are free,” the man said. 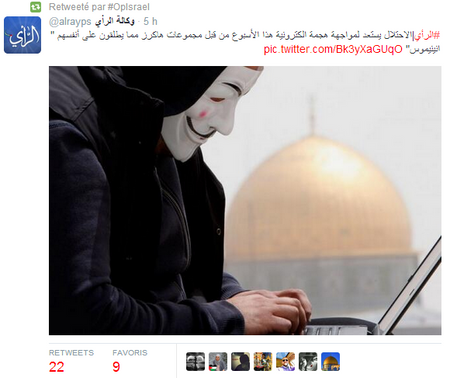 The attack, which has occurred annually for the past four years, comes a week before Israel commemorates Holocaust Remembrance Day on April 16, and comes in response to continued “aggression, bombing, killing and kidnapping of the Palestinian people, as in the last war against Gaza in 2014,” according to the video.

“A message to the youth of Palestine, you are a symbol of freedom, resistance and hope: we are with you and will continue to defend you,” the video states.

The group has targeted websites belonging to the Israeli Defense Forces, the prime minister’s office, the Bank of Israel and the Embassy of Israel to the United States, in past years.

On Tuesday, many Israelis received text messages saying “We’ll free the two holy mosques from the sons of the Jews,” in Arabic.

A journalist at i24news who received the text message thought that “it was funny” and that she did not feel intimated in the least by the text. “If you are going to threaten someone, at least be accurate in your threat,” she said, referring to the fact that there are no Jews in Mecca.

An estimated 300 websites were also hacked by the group, including the official sites for singers and bands Shalom Hanoch, Ivri Lider, Hadag Nachash, as well as the Israeli Center for Excellence through Education, the Israeli Urological Association, Ofakim College, among others.

The hackers also claimed to have hacked into various email accounts and the Israeli court system.

According to the Institute for National Security Studies (INSS), AnonGhost has launched cyber-attacks against Israeli targets for the past seven years, each time on April 7. However, the offensive it threatened for this year was believed to be so potentially damaging that it was dubbed an “electronic Holocaust.”

According to INSS, “the hackers are mostly Muslims from Gaza, Syria, Morocco and other countries in our region. As a group they generally oppose the establishment and are influenced by various radical Islamist and terrorist movements, who also drive them towards attacking Israel.”

“The terror challenges facing Israel and the West are not only physical, but cyber as well. Israel is confronting these threats from Shiite Hezbollah and from Sunni Hamas on a daily basis. They are sophisticated and becoming more so,” according to Col. Gabi Siboni, head of the INSS Cyber Security Program.

Siboni further added that more Western countries will have to face cyber-terrorism sooner rather than later.