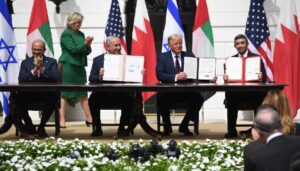 AIPAC responded to these resolutions and wrote: “AIPAC commends the overwhelming bipartisan majorities in the Senate and the House that have currently cosponsored resolutions supporting the historic peace agreements between Israel, the United Arab Emirates (UAE) and Bahrain”.

“Under these agreements”, the AIPAC statement read, “the UAE and Bahrain join Egypt and Jordan in paving the path to peace through recognition and engagement rather than by seeking to isolate and boycott the Jewish state”.

According to details published by AIPAC, these are the major elements of the Senate resolution:

These are the major elements of the House resolution, as published by AIPAC:

Who did not co-sponsor the Abraham Accords resolution?

Independent senator and former presidential candidate Bernie Sanders did not co-sponsor as well.