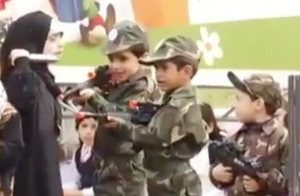 The Palestinian Authority (PA) on Thursday blasted as “terrorism” Israel’s decision to close an Arab elementary school in Jerusalem due to its spreading of incitement.

The closer houses are Sur baher. The farther houses on the mountain, on the left are the edges of al-Ubeidiya. On the mountain on the right is believed to be Wadi al-Arayis and Juhdum. – Photo: Wikimedia Commons

The Al Nkhba School in the Sur Baher neighborhood of eastern Jerusalem was ordered to be closed after it was discovered that the school had been established by officials affiliated  with the Hamas terrorist organization, and that the curriculum included severe incitement against the State of Israel.

The PA’s public diplomacy bureau said in response that the closure was yet another part of Israel’s “terrorist activities”, adding that Israel’s claims that there was incitement in the school’s curriculum were “lies”.

The statement claimed that Israel is systematically working against Palestinian Arab educational institutions as evidenced by demolition of buildings, attempts to impose the “poisonous” Israeli curriculum on the schools, breaking into school buildings, and killing and detention of teachers and students.

The public diplomacy bureau called on the European Union and on UNESCO to take immediate action to bring an end to Israeli “terror” and its alleged attempts to cancel the Palestinian curriculum and introduce in its place an Israeli curriculum “based on incitement to racial hatred and terrorism” against Palestinian Arabs.