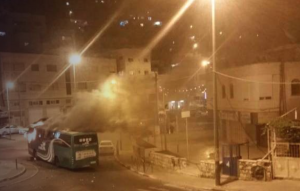 The Israeli army is on alert and is preparing for continued violent clashes in Jerusalem as Palestinians plan protests in the capital and the West Bank following afternoon prayers against the backdrop of tension on the Temple Mount. 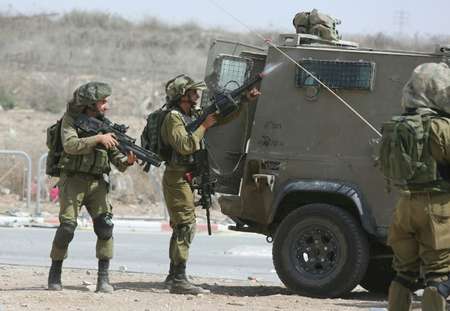 An extra 800 policemen will bolster the regular Jerusalem force and men under the age of 40 will be barred from praying at the al-Aqsa mosque, due to intelligence received by Israel that young men have been planning to clash with security forces on the Temple Mount Friday morning.

Hamas, the Islamist movement that runs the Gaza Strip, along with a number of other Palestinian groups, has called for a “day of rage” for Friday to coincide with weekly Muslim prayers after what they call an Israeli ‘assault’ on Muslim worshipers at the al-Aqsa mosque.

Three days of clashes between Israeli police and Muslim protesters rocked Jerusalem’s Al-Aqsa mosque compound this week as Jews celebrated their new year, and there are fears of more trouble with a series of religious holidays approaching.

The violence in Jerusalem drew condemnation Jordan, the Palestinian Authority, Egypt and others. Israel meanwhile, has accused Turkey of being responsible for the recent violence, reported Israel’s Channel 2 news.

According to the report, which cited unnamed Israeli leaders, Hamas leader Saleh al-Arouri, who is currently living in Turkey, is responsible for organizing the violence from afar. The onus therefore, has fallen on the Turkish government for allowing al-Arouri to funnel large amounts of money to Hamas and their armed military wing from Turkey.

Turkey has rejected the claims, saying that al-Arouri is no longer in Turkey.

One bus hit by stones, another by Molotov cocktail

A bus was engulfed in flames Thursday evening after it was hit by a possible Molotov cocktail in the East Jerusalem neighborhood of Ras el Amoud. According to Israeli media, the driver initially fled the bus after it was pelted by stones and alerted the police. When he returned with the police they found the bus on fire. 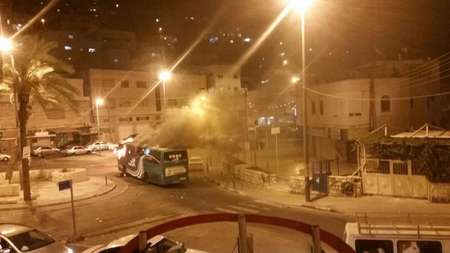 Israeli bus on fire in East Jerusalem after being hit by Molotov cocktails and stones, September 17 2015 – Photo: Jerusalem Firefighters and Rescue Services

Also on Thursday evening, a bus driver was injured in a stone throwing attack near the West bank village of Binyamin, Israeli media outlets reported. The man was taken to Jerusalem’s Haddasah Mount Scopus Hospital after being lightly injured after his windshield was damaged. Security forces are searching the area for suspects.

The decision is a win for Netanyahu in his “war on rock throwing”, which has emerged in response to a series of attacks against Israeli drivers and escalating clashes between Israeli police and Palestinians on Jerusalem’s Temple Mount complex.

Prior to Attorney-General Yehuda Weinstein’s decision, only soldiers facing violent Palestinian protesters were permitted to open fire with live ammunition if the situation believed to be life-threatening. 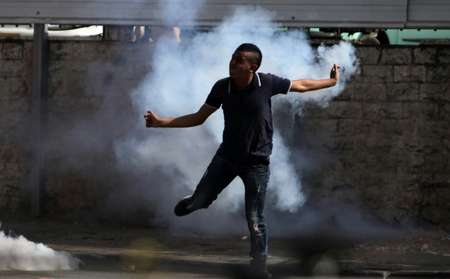 A Palestinian youth runs through tear gas smoke during clashes with Isareli soldiers in al-Ram, near Ramallah, following a protest after Israeli security forces entered the al-Aqsa mosque compound in Jerusalem, on September 15, 2015 – Photo: Abbas Momani/AFP

However following an uptick in rock-hurling incidents in West Bank and East Jerusalem, top Israeli officials including Netanyahu believe the rules of engagement could be hardened.

“Since the justice system finds it difficult to deal with minors who throw rocks, changes to orders on opening fire towards stone- and petrol bomb-throwers will be examined,” Netanyahu’s office said in a statement.

Jerusalem’s mayor Nir Barkat told The Times of Israel that in order to stop the threat of increased violence, “police will have to be dramatically more aggressive,” adding that those who throw stones and Molotov cocktails need to know that if “they put other people’s lives at risk, they are putting their own lives at risk.”

Palestinian officials hit out at the potential policy, denouncing it as “criminal”.

“This rightist Israeli fanatic government is pursuing its criminal policy to kill Palestinians. The new regulations would mean more escalation, killings and crimes against our people” Wasel Abu Youssef, a member of the Palestine Liberation Organization’s Executive Committee, was quoted by Reuters as saying.