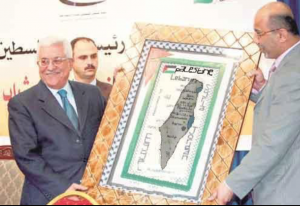 Proposed UNRWA change would end decades of the Palestinians teaching children at the UN’s expense to not recognize Israel’s existence, and brainwashing them to want to return to “Palestine” and destroy Israel.

UNRWA Judea and Samaria Manager Taeh al-Bas announced the UNRWA Education Committee’s intention to change the textbooks of schools belonging to the organization.

Official logos to six different UNRWA schools that include the UN logos along with Israel being replaced by ‘Palestine’. – Source: ElderOfZiyon.blogspot

In an interview with Palestin on Saturday, al-Bas said the changes are all connected to “national issues related to Palestinian cities conquered by Israel in 1948, geography maps, history, and national culture.”

He also warned the changes were “very dangerous.”

According to al-Bas, the changes are meant to prove UNRWA is a neutral organization which teaches subjects objectively. He blamed UNRWA for allowing the US to dictate what happens in Israel and other countries.

Al-Bas called on the Palestinian Authority to involve itself in the matter, and said he had sent a letter to UNRWA demanding they immediately cease efforts to change the curriculum.

The Center for Near East Policy Research, led by David Badin, has closely followed UNRWA’s activities for two decades, and exposed the fact that the Palestinian Authority teaches children not to recognize Israel’s existence and brainwashes them to want to return to “Palestine” and destroy Israel.

Schoolchildren in UNRWA schools in Gaza are trained to infiltrate and attack Israeli towns,

Recently, an UNRWA employee was elected to the Hamas political bureau. The US government is currently investigating UNRWA’s connections to terror.