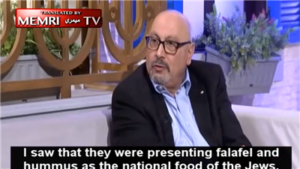 Palestinian thug who now represents PA in London, boasts with pride of mugging Israelis who said falafel was a national Israeli dish.

The man who the Palestinian Authority deemed appropriate to represent it officials in London, Manuel Hassassian, recently boast on Lebanese television that he once beat up an Israeli student at an American university in Ohio.

Hassassian was speaking on Al-Quds TV when he was asked about his student days at the University of Toledo.

Palestinian Ambassador to the U.K. Manuel Hassassian: As a Student I Hit an Israeli for Claiming Felafel Was the National Food of the Jews pic.twitter.com/ASuG7seeSP

The ambassador recalled his fury during a cultural event on campus:

“We displayed (an exhibition on) Palestinian folklore. Nearby was the Israeli stand, and one student declared that hummus and falafel were Jewish national foods.”

“I said to him: ‘how dare you? You steal my land, exile my people and now you are robbing us of our folklore and national foods? You claim that it is Jewish food? It is our food, of the Palestinian people, and I will not allow this.’ I then grabbed him and gave him a beating.”

If Hassassian’s revision of history is too much to swallow, just wait for the next part.

Obviously, such violence attracted the attention of campus police, who detained Hassassian for physically assaulting another student.

However, according to Hassassian, after he explained the situation to the officers, they told him “Palestine should be proud of you,” and set him free.

It is unclear how deploying such people as official representatives of the Palestinian Authority aids the purpose of peace.